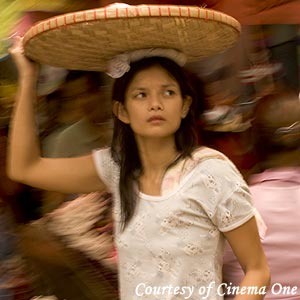 The proceeds of the movie screenings will help defray the costs of sending representatives of Rekados (Special Ingredients) to New Delhi, India, for the 9th Osian Cinefan International Film Festival.

Paolo Herras's indie film has recently been accepted as an official entry at the 9th Osian's Cinefan International Film Festival where it's in competition for the Network for the Promotion of Asian Cinema (NETPAC) Award.

Tickets will be sold at the venue.

Is there a recipe for love?

In the Rekados eatery, three women put secret ingredients in their dishes to get the men they desire.

When boyfriend-hungry Laura (Eula Valdes) elopes with her nth lover, her misguided teenage daughter Pinay (Meryll Soriano) is left with nothing except her withdrawn grandmother Josefina (Boots Anson-Roa) and their bankrupt eatery. To keep what's left of the family alive, Josefina cooks leftovers with stir-fried noodles for Pinay to sell on the street. While selling food in Quaipo, Pinay meets James (Mario Magallona), a seller of prayers, who falls in love with her even without eating a dish with a special ingredient. In a life that lacks flavor, the one true ingredient for one girl's search for happiness is love.

Sometimes a woman's only dowry in life are the recipes she inherits from her mother and the women of her family. These recipes can be her means, her voice, and, ultimately, her key in a kitchen that can either empower her or imprison her.

BIOGRAPHY OF THE DIRECTOR

Paolo Herras, 26, is currently taking his masters in Philippine Studies, Major in Film at the University of the Philippines. A graduate of BA Comparative Literature, Paolo participated in prestigious national writing workshops such as the 33rd U.P. National Writer's Workshop and the 11th Ricky Lee Scriptwriting Workshop for film and television. Paolo's first full-length script, P1.00/MIN (One Peso Per Minute) won the 3rd Prize of Star Cinema's 1st Scriptwriting Contest.

He has written and directed two films: Lambanog (Coconut Wine); and Rekados (Special Ingredients), an official entry to the 2nd Annual Cinema One Originals.