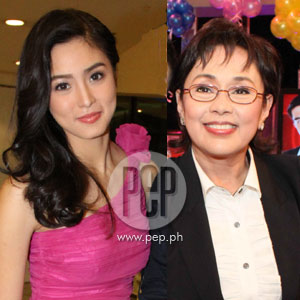 The host of the ABS-CBN show took this opportunity to ask the Governor of Batangas regarding her upcoming movie project, her political plans and her beauty regimen.

Kris pointed out Vilma has been serving as a public servant for 13 years already: 9 of them were as Mayor of Lipa and 4 years as Governor of Batangas.


Kris asked the actress-politician, how did these 13 years change you as a person?


"The good thing I've learned, you can do so many meaningful things for people even without a camera."


Kris continued, "For 49 years, ang showbiz ang bumuhay sa 'yo. When are you making another movie?'"


The actress-politician then expressed her desire to act in front of the cameras once again.


FUTURE POLITICIAN? Kris described Vilma's son, Luis, as "one of the best male hosts and a really good actor."

What are her dreams for her youngest son, Ryan?


DEFYING AGE. Kris also asked Vilma how she has managed to maintain her ageless beauty through the years.


Vilma smiled and asked, "'Really? In all honesty, magyayabang po ako, walang botox 'yan. Not even a single needle...I'm scared of needles.

"I have nothing against enhancement pero parang hindi pa ako prepared for it."


As for her exercise regimen, the award-winning actress revealed that she spends time on the treadmill and even Wii!


She also likes to go to a sauna right after "to sweat out." She explains, "Paglabas mo dun, you're reddish, ang [lambot] ng kutis mo."