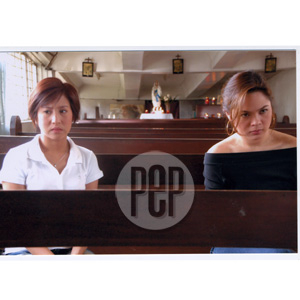 Both GMA Films and Viva Films made sure that Ouija would make the international rounds, thus choosing to shoot in scenic Camiguin Is. where the famous sunken cemetery is located. Judy Ann Santos (right) and Jolina Magdangal star in this movie, which is directed by Topel Lee.

GMA Films, in a co-production venture with Viva Films, presents its initial foray into the horror genre: Ouija. Directed by Topel Lee, this paranormal thriller will be shown in theaters nationwide starting July 25.

Judy Ann Santos and Jolina Magdangal star in their first full-length movie together. Being the first horror movie offering of GMA Films, the producers were very selective in choosing the storyline.

"It has to offer the movie-goers something new in terms of horror...and it also has to be realistic such that the viewers will feel that it could happen to them," explains Annette Gozon-Abrogar, president of GMA Films. In fact, the storyline of Ouija was inspired by a real-life documentary about a British Family who used Ouija board the wrong way. The material is based on a National Geographic story, as researched by the GMA Films head.

"Even for us, we never knew that you should not destroy a Ouija board, even by accident, or else the spirit called might get trapped in you, with no way to escape," stressed Joey Abacan, supervising producer.

Both GMA Films and Viva Films made sure that Ouija would make the international rounds, thus choosing to shoot in scenic Camiguin where the famous sunken cemetery is located. Lying 20 feet underwater in Barrio Bonbon, Catarman, Camiguin, lies the sunken cemetery, the remains of a volcanic eruption. Coral encrusted tombstones can be explored by snorkelers and scuba divers. A huge cross was installed in 1982 to mark the community cemetery, which sunk during the 1871 volcanic eruption of Mount Vulcan.

As part of GMA's 57th Anniversary, Ouija is written by Aloy Adlawan and is photographed by ace cinematographer Neil Daza. It is also the first movie by GMA Films to have an international screening.

According to director Topel Lee, "I am privileged to be working with the best and the most beautiful young actresses in the country today. I am grateful to GMA and Viva Films for giving me my very first full-length commercial film. A relatively new and young director couldn't ask for anything more."

The film can certainly boast outstanding performances, not only by Judy Ann and Jolina, but by the entire cast including Iza Calzado, Rhian Ramos, and Desiree Del Valle. "It was unthinkable at first, but GMA and Viva were able to do it! The shooting went very smoothly; we were so happy that we almost forgot that we were doing a horror-drama film!" says Jolina who expressed her delight in being reunited with her longtime good friend, Judy Ann. Celebrating her 20th year anniversary in show business, Judy Ann was likewise pleased with the project.

She said, "I am happy that I'm celebrating my 20th anniversary in show business with this film. It feels good that I am able to cross over and work with GMA again, even just in films. The bosses are very down-to-earth. I enjoyed every moment in doing this film."

Judy Ann started with Kaming mga Ulila and was also part of That's Entertainment, which were both shown on GMA-7.

Ouija will be showing in theaters nationwide starting July 25.