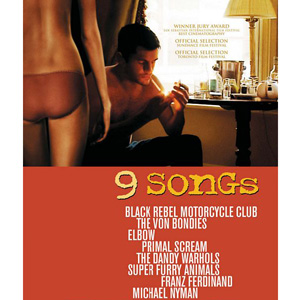 9 Songs is a 2004 British film that will be screened as part of the July screenings in Titus Brandsma Center. The title refers to the nine songs played by eight different rock bands that complement the story of the film.

The core group of Pelikula@TitusBrandsma selects films that correspond to a specific theme for each month. For the month of July, the chosen theme is Xtreme, Xposure, Xciting (Xploring Human Sexuality).

Aside from the scheduled screenings, guest speakers Dr. Sylvia Estrada-Claudio and Rev. Fr. Christian "Toots" B. Buenafe will speak to the audience about the chosen theme for the month.

This month's screenings will be held on July 21, 2007 from 1 p.m. onwards at the Titus Brandsma Center in New Manila, Quezon City.

Strictly for mature audiences only

Matt, a young glaciologist, soars across the vast, silent, icebound immensity of the South Pole as he recalls his love affair with Lisa, an American exchange student. They meet at a mobbed rock concert in a huge music hall—London's Brixton Academy. They are in bed at night's end. Together, over a period of several months, they pursue a mutual sexual passion whose inevitable stages unfold in counterpoint to nine live-concert songs.

2. To bring objectivity by putting out of restriction.

3. To deconstruct within bounds, to unconfine.

Destricted is the first short film collection of its kind, bringing together sex and art in a series of short films created by some of the world's most visual and provocative artists and directors.

The Destricted brand is the first in a continuing series. The seven films presented explore the fine line where art and pornography intersect. The films highlight controversial issues about the representation of sexuality in art; opening up for debate the question of whether art can be disguised as pornography or whether pornography can be disguised as art or something else altogether. The result is a collection of sexy, stimulating, challenging, provocative, strange and sometimes humorous scenarios that leave it up to the viewer / voyeur to decide.