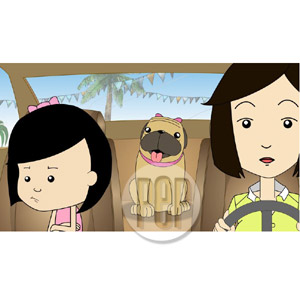 Libingan incorporates local traditions and mythology to its overall story, stressing Tuldok's objective to create animated films that would reflect Filipino culture. In the 20-minute film, Anna (left) travels with her mother and pet dog Rambo to the province, where the setting of the movie takes place.

Don't ask the people of Tuldok Animation Studios Inc. why Filipino animation has started to flourish only recently.

Not that they'll give you tiger looks for tossing such an inquiry. Rather, they all said in chorus that the boom in the industry has been long overdue and that the local animation scene should have been up on its feet way, way back.

"It has always been there," Tuldok mastermind Ramon del Prado sighed. "The problem is, there's no ample support coming from the government or there's no real group or organizations that are willing to really go out there and do all the dirty work."

Ramon explained that Filipinos are well known to be very talented when it comes to animation and design but since most couldn't obtain a decent living here, they are forced to leave the country and work for countries that have real animation studios and are supportive of such endeavor.

That fact combined with overflowing zest for creativity that could only come from an artist and fellow passionate souls prompted Ramon and fellow like-minded individuals to put up Tuldok Animation Studios Inc.

"Basically we want to take the initiative and promote locally made animation films here in the Philippines, simply because there's none at the moment," explained co-founding member, Ben Carandang.

Although Tuldok managed to gain the financial support and recommendation of the National Commission for Culture and the Arts (NCAA), the group proudly stated that they did everything the guerilla way.

"We have no office and we usually meet at a fast-food joint or somebody's house or room," laughs Ramon. "Anywhere, as long as we could do our work and do some planning without spending that much money," he continued.

The film revolves around a 7-year-old city girl named Anna who goes to the province with her mom and pet dog, Rambo, to meet her relatives. The visit is going well until Anna is bullied by three boys and accidentally toss her cellphone into a haunted forest.

Determined to recover her mobile phone and undaunted by stories of kapres said to be residing in the jungle, Anna and Rambo traverse the spooky forest and indeed prove that kapres do exist. But their startling discovery also debunks ancient misconceptions surrounding these feared mythical creatures popular in Philippine folklore.

More than its impressive presentation, Libingan triumphs with its desire to incorporate local traditions and mythology to its overall story, stressing Tuldok's objective to create animated films that would reflect Pinoy culture.

"We believe that it's important to always adopt our culture or traditions in all our creations because that's how we will be able to build our identity, especially to a wider or let's say global market," explained Ramon.

With Libingan, Tuldok hopes to jumpstart all of its future projects and endeavors on a positive note.

Tuldok, as we all know, means "dot" in the English language. Expounding it even more, it could both mean the end or starting point of something. The people behind Tuldok aim to promote the promising yet untapped animation film industry here in the country. With the launching of Tuldok's first film, that promise is on its way to fulfilment.