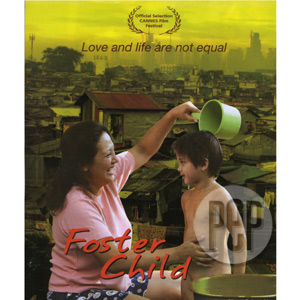 The third Cinemalaya Philippine Independent Film Festival opened with much fanfare last night, July 20, at the main lobby of the Cultural Center of the Philippines. The CCP Tanghalang Nicanor Abelardo Lobby was filled with independent and mainstream directors, indie stars, and members of academe for the opening ceremonies, which kicked off the nine-day film festival ending on July 29.

A dance interpretation, which featured performers wearing golden body paint and a stylized version of the Gawad Balanghai on their heads, was choreographed by stage director Chris Millado of Zsa Zsa Zaturnnah Ze Muzikal fame.

Right after the program, the audience was treated to the Philippine premiere of Foster Child, the official selection in the Cannes' Film Festival's Director's Fortnight earlier this year. This Brillante Mendoza film tells the story of a poor family that takes a foster child under their wing.

Seiko Film's Robbie Tan, the producer of the 98-minute digital film, revealed that Cherry Pie Picache was "prohibited [from using] hair conditioner for three days so she could really look like a squatter [resident]."

"I beg your indulgence because this is the first time that my son, is actually going to see a film of mine after all these years. To my son, Anton, honey ko, this is for you."

In an interview, Cherry Pie told PEP (Philippine Entertainment Portal) that she felt elated upon learning the news that Foster Child would be screened at the Cannes' Film Festival in France. She shared that it took them around 13 to 14 days to shoot the film in a depressed area in Mandaluyong.

A Seiko Films presentation of a CenterStage Prods. production.

Thelma (Cherry Pie Picache), together with her husband Dado (Dan Alvaro) and teenage sons Gerald (Alwyn Uytingco) and Yuri (Jiro Manio), are an urban poor family hired by a local foster care facility to provide temporary home and care to abandoned babies pending the latter's formal adoption. The inevitable separation is heart-rending for the foster family.

Thelma's foster child John-John (Kier Segundo) is to be turned over to his adoptive American parents. Every moment with the 3-year-old John-John becomes more precious as Thelma goes through the day fulfilling her motherly duties for the last time—bathing John-John, feeding him, and bringing him to school where the boy participates in a school presentation.

Accompanied by the social worker Bianca (Eugene Domingo), Thelma and her son Yuri deliver John-John to the posh hotel where the elderly American couple are billeted. The bittersweet turnover, underscored by the luxury of the place, delivers the painful truth that love and life are not equal.

The realization hits Thelma and Yuri as they leave the hotel.

Foster Child is Brillante Mendoza's fourth feature film, following Masahista (2005), Kaleldo (2006), and Manoro (2006). Mendoza is the fourth Filipino director whose work was screened in the Directors' Fortnight of Cannes film fest. The past filmmakers were Lino Brocka, Mike de Leon and Mario O'Hara.

The 2007 Cinemalaya Philippine Independent Film Festival will run until July 29 at the Cultural Center of the Philippines. For schedules of the screenings, visit http://www.cinemalaya.org/index.php?bn=2&seq=4&f=0

Ticket prices are P100 for the regular screening of competition and exhibition films and P120 for gala or premieres.