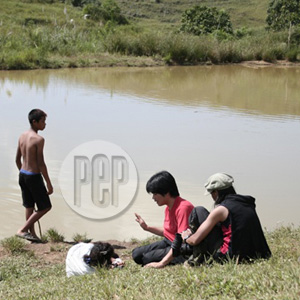 Sherad Anthony Sanchez (second from right, in red shirt) directs the cast members of Huling Balyan ng Buhi (international title: The Woven Stories of the Other). The filmmaker will be the first Filipino to be a jury member in the Munich Filmfest Competition next year.

Works of Filipino filmmakers Sherad Anthony Sanchez and Raya Martin have now been recognized in Europe.

Huling Balyan ng Buhi (international title: The Woven Stories of the Other) bagged the Prix Premiere or The First Film Prize Award in the First Film and Sound Competition at the recent 18th FID (Festival International du Film) or the Marseille Documentary Film Festival in France.

This indie film, which was named Best Picture in the 2006 Cinema One Originals Film Festival, tells the story of a priestess' conception of stigmata. The jury was headed by Iranian director Manoushak Fashahi, joined by Ulrike Kasper (Germany), Michele Sylvander (France), Gilles Laurent (Belgium) and Patrice Nezan (France).

In the same film festival held last July 9, Raya Martin's second feature film Autohystoria won a Special Mention in the International Competition of the 18th FIDMarseille held in France. The film is a quasi-autobiographical account of two city brothers paralleling with the Filipino historical figures Andres and Procopio Bonifacio.

The FID Marseille is one of the world's prominent documentary festivals, and in this year's edition has decided to include fiction films that blur the boundaries between fact and fiction, including the Malaysian film Love Conquers All by Tan Chui Mui.

MUNICH FILM FESTIVAL. Sherad also won the One Future Prize award at the Munich Film Festival in Germany for Huling Balyan ng Buhi for its international release. Chosen from over a hundred submitted competitors, Munich Film Festival Competition's seven jurors from Europe, Asia, USA, and South America shortlisted the entries to twenty-five. Sherad's Huling Balyan ng Buhi was chosen as one of the five finalists.

With the jury's enthusiasm over the young filmmaker's work, Sherad was reportedly invited to next year's competition, already as a jury member; henceforth making him the first Pinoy to be part of jury in the Munich Filmfest Competition and also the youngest member.

Gigi from Arakan Valley is a woman rebel who teaches young comrades the facets of their struggle as they remain in waiting after they were ambushed. In a nearby village, Junjun and his fellow soldiers take a rest. He attempts to chance upon a girl he longs for, but instead encounters a balyan/tagbawian (shaman) in a very disturbing situation. Somewhere, two kids, Abyan and Busaw, trek the forest back to their mother.

With Cinema One set to celebrate and feature select classic Filipino movies in its 2nd Annual Kool Pinoy Klassiks on August 1 to 5 at the SM Megamall Cinema 1, Huling Balyan ng Buhi will also be one of the main feature films. It will also shown in the 2007 Cinemalaya Independent Film Festival on July 27, Friday, at 3:30 pm and on July 29, Sunday, at 12:45 pm at the Cultural Center of the Philippines.

Huling Balyan ng Buhi (or The Woven Stories of the Other) was produced in 2006 by CPI under the Cinema One Originals project.