Star Cinema's "A Love Story" to be shown starting August 15 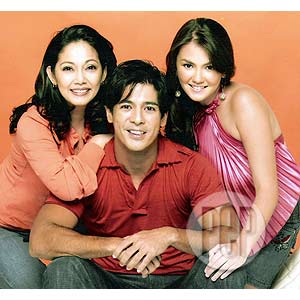 What would you do if you met a woman you want to marry—after you already married someone else?

Ian Montes (played by Aga) is a succesful man. He's the son of a shipping tycoon but he refuses to simply rely on his father's empire. At a young age, Ian earns his first million by putting up his own real-estate company. Driven by his ambition not only to equal but surpass his father's achievements, Ian is determined to make it on his own.

But the successful businessman is actually a man longing for love and recognition.

Emotionally scarred by his mother who abandoned him when he was 17 and desperate for his father's approval, Ian longs for someone who will love him unconditionally. He experiences such love twice when he meets two women who change his life forever—Dr. Joanna Villanueva (Maricel Soriano) and Karyn (Angelica Panganiban).

Doctor Joanna is the epitome of quiet confidence and success. Yet she is in the process of healing her heartbreak caused by an errant ex-husband. Joanna falls in love again when she rescues Ian in a wakebording accident in Batangas. Joanna nurtures Ian with love and affection. For his part, Ian experiences having the home that he sorely missed and leads a life of bliss he never thought possible.

But then, there's Karyn.

Karyn is the flight attendant whom Ian met on a business trip to Macau. At 24, Karyn is the paradigm of youthful sensuality and worldliness. With Karyn, every moment is filled with excitement and spontaneity.


Ian faces a difficult choice. In the end, the three characters learn in the most painful way the true meaning of unconditional love and forgiveness.

A Love Story is about three souls caught in a situation that changes their lives radically, making them realize that love can bring indefinable joy but can also cause heartaches, leaving scars that will never heal. A Love Story is written for people who believe that, whatever happens, love is still the force that makes the world go round.

"Intriguing!" says Direk Maryo J. who previously directed both Maricel and Aga. "This movie is a welcome reunion for the three of us."

Angelica is overwhelmed by this rare chance to be in the same frame with Maricel and Aga. "I hope I survive the encounter," she says. "It's a dream come true."

"A Love Story has all the right ingredients," pagtatapos naman ni Aga.