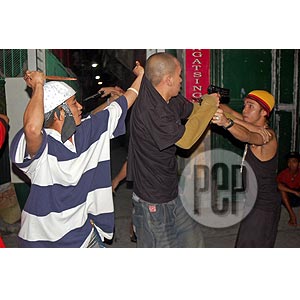 Jim Libiran, a native of Tondo, was referring to the crackdown of Manila Mayor Alfredo Lim on members of street gangs—also called "tribes," hence the title of his movie Tribu.

The closing ceremonies of Cinemalaya 2007 took place at the Tanghalang Nicanor Abelardo of the Cultural Center of the Philippines. The event was hosted by Sid Lucero and Agot Isidro—both of whom had appeared in previous Cinemalaya entries, Donsol and Tulad ng Dati, respectively. Sid also participated in two Cinemalaya entries this year—the full-length film Tukso and short-feature film Tagapagligtas.

Francis Magalona performed his song "Kaleidoscope World" while The Dawn gave a rousing number by singing "Enveloped Ideas." Members of The Dawn were the lead actors of the film Tulad ng Dati, which won Best Film in last year's Cinemalaya.

Tribu was cited as Best Film for "its grand and graphic depiction of contemporary Tondo, Manila, its raw passion and searing violence, its terrible social conditions and conflicting social mores..." The film also won Best Sound (Mark Laccay) for "its masterful rendering of the noise and hum of inner cities, the racket and resonance of the asphalt jungle."

Jim received a Gawad Balanghai trophy, a grant of P200,000 from the Film Development Council of the Philippines (FDCP), and a P1 million post-production grant from Roadrunner.

The broadcast journalist-turned-filmmaker—who first received recognition for reportage on the war in Iraq and Afghanistan—tackled close-to-home violence in Tribu. Jim's screenplay about Tondo gang members won second prize during the 2006 Carlos Palanca Memorial Awards for Literature.

Jade Castro's Endo won the Special Jury Prize "for its revealing take on the lives of "end-of-contract" casual workers in the retail and services sectors, and for its subtle and moving rendering of a love story amid an otherwise deprived social milieu..." JD Domingo of Endo also bagged the Best Editing Award for the full-length feature category that night.

On the other hand, Aureaus Solito seemed very comfortable while receiving his Gawad Balanghai trophy for Best Direction. The man behind the Martial Law film Pisay adds another award to his shelf of trophies from the Berlin International Festival, Asian Festival of 1st Films, and the Gawad Urian.

"We are at an age when our voices are being heard, we are at an age when we must share our art to the country," declared Auraeus during his acceptance speech. He also received a high-definition camera from Sony and Solid Video for winning the Best Director Award in the full-length category.

AUDIENCE CHOICE. A new award—the Audience Choice—was launched this year in Cinemalaya. For the first time in its three-year history, the viewers could vote for their favorite among the 8 full-length and 10 short-feature films screened during the ten-day festival. Pisay won the full-length category while Doble Vista, directed by Nisha Alicer, Nix Lañas, and Caren Crisologo, won the short-feature category.

Cinemalaya competition chairperson Laurice Guillen told PEP (Philippine Entertainment Portal) the rationale behind this new award. "We thought about it last year but there was not enough time to do the mechanics. We tried it this year and it gives the audience some satisfaction that they get the chance to choose their favorites."

SHORT FEATURE CATEGORY. Alvin Yapan's Rolyo won Best Film in the short-feature category. The fiction writer and Ateneo de Manila professor received a Gawad Balanghai trophy, a P100,000 grant from the FDCP, and a one-term training of the filmmaker's choice, and P25,000 from the International Academy of Film and Television.

The Special Jury Prize went to Nineball by Enrico Aragon. It was cited for "its hilarious and satiric take on the national pastime, billiards, and its engaging characterization." Enrico received P25,000 from the FDCP and a Gawad Balanghai trophy.

Other award-winners in the short feature category were: Emmanuel dela Cruz for Gabon (Best Direction), and Vic Acedillo for To Ni (Best Screenplay).

Eight films competed in the full-length feature category during the third edition of Cinemalaya. These were: Endo by Jade Castro, Kadin (The Goat) by Adolfo B. Alix Jr., Gulong by Romualdo "Bona" Fajardo and Anna Liza "Lyn" Fajardo, Ligaw Liham by Emilio "Jay" Abello VI, Pisay by Auraeus Solito, Still Life by Katrina Flores, Tribu by Jim Libiran and Tukso by Dennis Marasigan.

Eduardo Lejano Jr.'s entry Sinungaling Na Buwan (Liar Moon) was pulled out from the competition because it was not finished on time for its gala screening.

Cinemalaya 2007 will move over to UP Cine Adarna in the University of the Philippines, Diliman, on July 31 to August 4.
Read Next
Read More Stories About
Cinemalaya, indie
Post a Comment
Featured
Latest Stories
Trending in Summit Media Network