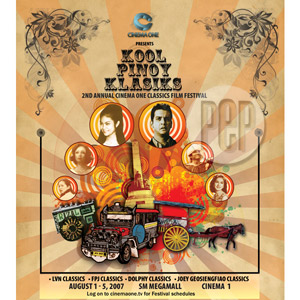 Organized by Cinema One, the 2nd Annual Kool Pinoy Klasiks will take place at Cinema 1 of SM Megamall from August 1-5, 2007.

Cinema One, the Pinoy movie cable channel of ABS-CBN, will be screening a combination of hit independent, digital, and mainstream films during the 2nd Annual Kool Pinoy Klasiks from August 1-5, 2007.

Select films that have made their mark in the Filipino film industry will be shown at Cinema 1 of SM Megamall during the five-day film festival. With the success of the Anniversary Classic Film Festival last year, the 2nd Annual Kool Pinoy Klasiks is helmed and produced by Cinema One in its fervent support for local entertainment.

An added feature will be a sentimental tribute to Regal's beloved director Joey Gosiengfiao, who died of a heart attack last March 16. The viewers of his films will be given the opportunity to know the persona of a filmmaker whose perspectives are reflected through his playful movies and their distinct appeal. The festival also salutes the best of LVN Pictures, the hilarious humor of Dolphy in his comedy films and the best horror movies of Philippine cinema.

Kool Pinoy Klasiks will kick off on August 1, Wednesday, starting with Captain Barbell starring Comedy King Dolphy and Lotis key in one of their more popular hits together. Dolphy stars in the title role, with Ting-Ting as his alter ego. Little did anybody know he has the superpowers that could save mankind. The beautiful classic Malvarosa is programmed at mid-afternoon. This 1958 LVN classic stars Charito Solis who portrays a character whose strength of spirit made her a triumphant survivor amidst life's burdens. In the evening will be the Cinema One Originals' Pandanggo. This digifilm stars Chin Chin Gutierrez and Raymond Bagatsing who get entangled in the interspersing of three different stories. Finally closing the day will be La Paloma-a drama that pits Celia Rodriguez against her sister who is her greatest rival in everything.

August 2, Thursday, will be opened byDa Best in the West with Dolphy, Weng Weng and Lito Lapid in their first and last successful screen trio by RVQ Productions in 1989. After that will be the Cinema One 2006 digifilm Raket Ni Nanay starring Mark Gil, Sarsi Emmanuel, and Archie Adamos who are connected by their struggles and compromises they give into. This will be followed by Mutya ng Pasig, the 1950 LVN classic starring Jose Padilla, Jr. and Rebecca Gonzales. Next in the lineup is Rekados, the Cinema One Original 2006 finalist by director Paolo Herras starring Meryll Soriano, Eula Valdes, and Boots Anson Roa whose stories are intertwined by their romantic lives. Final feature for the day is Regal Film's 1980 sensual classic Bedspacers starring Alma Moreno and Rio Locsin.

Friday, August 3, starts with the RVQ comic hit Fefita Fofongay starring Dolphy and Rosanna Ortiz. One of Star Cinema's highest grossing films Feng Shui follows after, top billed by Kris Aquino, who accidentally picks up a lone bagua mirror unknown initially and causes compromising advents of good and bad lucks. Shortly after will be the classic Kundiman ang Lahi. This 1959 LVN classic of director Lamberto Avellana stars Charito Solis, Eddie Rodriguez, Joseph de Cordova and Rosa Aguirre in a tale of difficult lives meeting difficult choices for the redemption of oneself. At 5:30 pm will be Sa North Diversion Road, a Cinema One 2006 digifilm starring Irma Adlawan and John Arcilla in a tale of infidelity of many different ways, through many different roads. The next will be Biyaya ng Lupa starring Rosa Rosal, Tony Santos, Leroy Salvador, Joseph de Cordova and Marita Zobel. This classic is one of the Filipino gems exhibited in an international film festival and won acclaims and awards and noticed for its cast. The night will be capped by the amusing Nights of Serafina starring Georgia Ortega, John Apacible, Mike Magat and a young Angelika dela Cruz. This 1996 Regal Films camp is where the trademark gay-ish line "walang nangyari sa barko!" marked to pop consciousness.

Starting the line up for Saturday, August 4, will be Katorse. This 1980 Regal Films classic gem positioned Dina Bonnevie for stardom with a raw yet effective performance of a rich girl gone wild who pays a horrifying price for it in the end. This is followed by the action comedy Dolphy's Angels with Carmi Martin and Yellen Catral. This 1980 RVQ Productions hit sets the John & Marsha popularity to another dimension when Dolphy becomes a secret agent to solve a crime alongside his lovely consorts. Huk Sa Bagong Pamumuhay follows right after. It stars Jose Padilla, Jr. and Celia Flor. Next will be the digifilm Huling Balyan ng Buhi (international title: The Woven Stories of the Other). The 1980 great Lino Brocka film Bona is next, starring Nora Aunor and Philip Salvador. Here's where idolatry and blind romance lead to a horrifying crime by the so-called weak. Finale film of the day is Temptation Island. This Joey Gosiengfiao masterpiece revolves around women whose personal idiosyncrasies set the story's amusing pace when they get lost in an isolated island. It stars Dina Bonnevie, Azenith Briones, Jennifer Cortez, Deborah Sun, and Bambi Arambulo.

The last day of Kool Pinoy Klasiks, August 5, Sunday, will be led by La Paloma and followed by Kakabakaba Ka Ba? with Christopher de Leon and Charo Santos in 1980. Badjao, an LVN gem in 1957 stars Rosa Rosal and Tony Santos follows right after. The event will be culminated by no less than the classic film, Mutya ng Pasig.