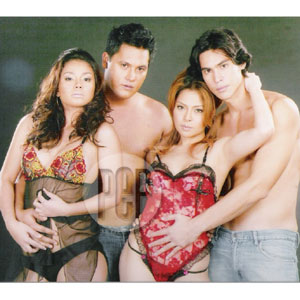 Casa is the latest indie film megged by director Deo Fajardo, Jr. The movie stars Asia Agcaoili, Paolo Paraiso and Michael Rivero. Casa, which means "house" in the Spanish language, is about three people living-in together under one roof—the beautiful wife, her former lover, and her blind husband. The FHM columnist even has love scenes with another woman, Mikaela Espinosa, in the said digital film.

Deo's indie film tells the story of a soldier's wife (Asia) who after learning that his husband (Michael) has gone "missing in action" rekindled an old flame (Paolo). However, months later, her husband, who is temporarily blinded after doing combat in Mindanao, returns home. Because of his injury, he remains ignorant of the fact that he is sharing their casa ("house") with his wife's ex-lover.

This suspense-thriller is set to open in select theaters starting today, August 1.

PEP (Philippine Entertainment Portal) talked to the film's director Deo and here's what he told us about Casa.

Is Casa your first indie movie?

How did you motivate your artists to do daring scenes, especially Paolo Paraiso, since this is his first daring film?

How "bold" is the movie?

Knowing Asia is in the lead role, who is a "sex guru," you can just imagine how bold the film is. But it's tolerable with art.

What is the redeeming factor of the movie?

How is Casa different from other indie films that have sex and violence as ingredients?

The look of Casa. Hindi siya mukhang indie na kinunan ng video cam. 35mm siya in terms of production value. Sex and violence is natural because of the plot, [which is] infidelity.