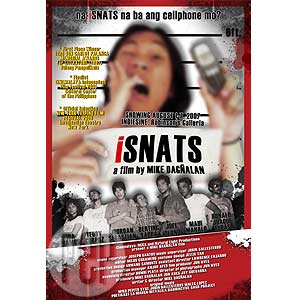 The action-adventure movie iSNATS is written, produced and directed by Mike Dagñalan.

Based on an award-winning screenplay, the director's cut of iSNATS will be shown commercially at Robinsons Galleria's IndieSine from August 1-7, 2007. iSNATS is an action-adventure movie about a simple cellphone snatching incident that leads to gangster skirmishes.

Michael Angelo Dagñalan's screenplay won First Place in the 52nd Don Carlos Palanca Memorial Awards for Literature in 2002. iSNATS was first screened in the 2005 Cinemalaya Philippine Independent Film Festival and was included in the official selection of the 2006 New York Film Festival.

This neo-realist movie tells the story of a cellphone snatcher-collector named J who gets into trouble when he steals Sam's cellphone. It turns out that Sam is a cop-turned-drug dealer.

J thinks he hits it big-time when he gets a drug delivery through the snatched phone. But drug lord Rudy wants his drug money so he orders/threatens Sam to get it back. Local gangster Bonsai gets in the way and pushes J and Sam into deeper trouble. Sam and J team up to survive and eventually escape on a rusty PNR Bicol Express Train.

The duo then decide to reform their lives when they reach the province. The police capture drug lord Rudy when he throws away the cellphone that caused them all the trouble in the first place.

Shot on the gritty streets of Cubao and Recto, the film portrays a man's attachment to material things, which leads him into making bad decisions. Mike Dagñalan's movie also gives us some tips on how to avoid cellphone snatching and shows the detrimental effects of technology on people.