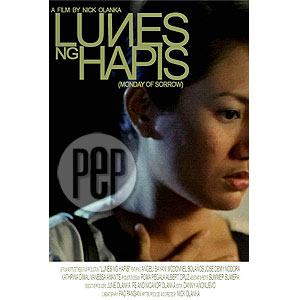 Lunes ng Hapis is a twelve-minute film by Nick Joseph Olanka. It is one of the short films to be screened at Titus Brandsma Center this Saturday, August 4, for the tenth anniversary of the group Pelikula@TitusBrandsma.

The core members of Pelikula@TitusBrandsma select the short films that will be screened this Saturday, August 4, in time for the tenth anniversary of the group. For the month of August, the chosen theme is 1sang Dekada Na!, 3rd "Indie" pendents' Day.

This month's screenings will be held on August 4, 2007 from 1 p.m. onwards at the Titus Brandsma Center in New Manila, Quezon City.

Inspired by the 1965 Palm Sunday tornado outbreak as well as several other true tornado facts and encounters, two tornadoes rip through a small town while the residents scramble for cover.

Filipino patients born with rare disorders are "orphaned" by society. They suffer from social abandonment due to the lack of a support network to aid them. Medical help is poor, given that the country's health is not the government's priority.

The film shows a series of moments involving the people of Sitio Sumirib, Barangay La Paz in the municipality of Nueva Valencia, province of Guimaras, one of the areas most affected by the massive oil spill from the sunken tanker Solar 1 chartered by the Petron oil corporation.

TUBIG (Water), MTV by Zone One (Zone One Tondo Organization in cooperation with Bread for the World

The film revolves around Ramwen, a specialist in scaring children and known to be the best in the business. Everything goes well until an Indian urban legend brings back his own childhood fears. This is the first film that deals with the "Panakoba" or "Panakot Bata"—the Filipino version of the Boogeyman.

A schoolboy has the task of reciting a poem, Sa Kabataang Pilipino by Dr. Jose Rizal, at his school's Foundation Day celebration. The night before his recitation, the schoolboy meets a wounded insurgent, who has an important assignment to carry out. An unlikely camaraderie, kindled by their mutual familiarity with the poem, develops between the boy and the rebel. They soon find out, however, that one's task goes against the other's and only one of them will survive the crossfire.

This documentary on teenage rappers residing in Tondo focuses on how they articulate their existence, environment and sentiments through the literature that they create. Though these rap songs are dismissed as just "pop culture", the Tondo rappers produce historical texts about life in the slums, gang wars, love and their personal lives, which "bourgeois" texts cannot give justice to.

It is music that binds the disabled Angel to two of the most important persons in her life: her mentor who painstakingly teaches her to play the violin despite her disability; and her lover who's been accompanying her in the darkest hours. While we traverse the paths Angel takes, we ask ourselves about the impact of music that can't be heard.

Virgie, an elementary school teacher, and Ismael, the captain of the troop assigned to infiltrate the rebels, are lovers in the midst of a military offensive in Filomena. Every Monday they meet and make love passionately and violently. One day, the father of one of Virgie's students disappears. Virgie must choose between her love for Ismael and love for her community.

A Filipino migrant worker, who works at a factory in South Korea to provide for his family in Antique province, Philippines, sees in his dream his late grandmother who calls him to return to the Philippines in order to continue their family tradition of healing. From the next day, strange things happen to him and he wanders the city of Pusan following the voice that haunts him.

The face of the domestic worker in Hong Kong is that of a Filipina. These are their stories, told in their own voices.

Isabel, a blind girl who journeys in a dream world formed through the emotions she feels, shortly plays with her new mystical friends "Saya" (Happiness) and "Pag-asa" (Hope). But soon, she is succumbed by her negative thoughts of becoming alone. Her life becomes endangered. And the question is: "how would she overcome her fear, helplessness and depression in this struggling situation?"

Hipolito, a highly-strung businessman discovers his wife's infidelity and decides to have her killed. Three years later, the killer-for-hire named Dagis returns to Hipolito with news that his wife is alive and out to get him.

This is a coming of age story of two women set in the city slum community beside railroad tracks. They became bestfriends, shared dreams and eventually started a family when a child accidentally entered their lives. Inserts of Real stories of women and a man gives color to this black and white film. a mixture of drama, comedy, musical and fantasy that will surely touch your heart.

Running low on cash and eager for a quick fix, JunJun scores some homemade drugs from his dealer, the effects of which are alien to him. When the new maid arrives to work for the family, JunJun finds himself drawn to the mysterious woman. As the days unfold, Alya reveals to him a dark secret; and he realizes too late the dangerous power of the drug.

The film captures man's inner struggles with himself and the echoing noise of his conscience. Stalked by his own shadow, the character gets embroiled in a plethora of emotions obscuring his ability to make sound, life-changing decisions.

Based on the short story "Impeng Negro" by Rogelio Sicat. Impen is a teenager raised in slum who fetches water for a living. He lives with his house-bound mother who doesn't work anymore. She has lost self-confidence and is ashamed about her past. Here is a world of hopeless poverty and depression.

A middle-aged woman returns to her hometown to verify the death of her estranged mother only to find herself reexamining the reasons that drove her into exile for the past 25 years.

The film captures the frenzy of a Sinulog festival. Like the perfectly choreographed street dancers, it melds dance, movement and imagery into one joyous rhythm of life.

A young boy takes care of his mentally ill father while struggling to make a living by selling shellfish at a squatter colony by the sea. He forms a tentative friendship with Mayang, a young girl with secrets of her own.

A poor boy with no slippers dreams of playing tumbang preso, a kids' game of hit-the-can.

A boy gets bullied and abused for his love of flowers.

One of the ten short films commissioned by UNESCO, France, for its podcast series project. It joins films from Mozambique, Kenya, Nigeria, Guatemala, Italy, Mexico, India, Iran and Pan-Africa.

A trilogy of experimental shorts showcasing a surprising ensemble cast.

A day in the life of a fortune teller (Luz Landicho) in Quiapo. She predicts other people 's lives without knowing what will happen to her.

"A burlesque, harsh satire on the mistress of Philippine film production, Chinese-Filipino producer Mother Lily. She is hated and feared, but nobody can get around her. Fortunately this young film maker has thought up an adequate solution to keep Philippine cinema alive. Mother Lily is not a metaphorical invention. She really exists - for now." —Gertjan Zuillhof, International Film Festival Rotterdam.

This is a series of independently produced public service advertisements about the present human rights situation in the Philippines. Initiated by filmmakers involved in the Free Jonas Burgos Movement, it is an open and continuing call to defend human rights.

A music video about the yearning for love and desire be loved in return.

Starring the late Elmo Redrico and featuring the song "Nice" of Delakrus, the story gives us a look at the bile of loneliness tainted with sadness.