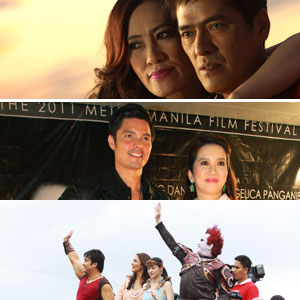 The top three leading entries in the 37th Metro Manila Film Festival are (from top to bottom): Enteng ng Ina Mo, Segunda Mano and Ang Panday 2. This is based on box-office figures from the MMFF Executive Committee for the period of December 25, 2011 to January 1, 2012.

When the 37th Metro Manila Film Festival kicked off on December 25, 2011, Vic Sotto and Ai-Ai de las Alas of Enteng ng Ina Mo emerged as the frontrunners of the annual event that aims to boost the Filipino movie industry.

According to the MMFF executive committee under the Metro Manila Development Authority (MMDA), the said fantasy-comedy film grossed P91.89 million during the first three days of the festival.

The box-office battle continues to heat up as two MMFF entries compete with each other for second place.

At the start of the MMFF, Ang Panday 2 was in 2nd place but based on the latest figures provided by the MMFF executive committee, it has already been overtaken by Segunda Mano.

The Kris Aquino-Dingdong Dantes starrer, Segunda Mano, landed on 3rd place with its gross of P46.93 million as of December 27, 2011. As of yesterday, January 1, the horror-drama produced by Star Cinema/MJM Productions already moved up to second place with its 94.6 million gross.

Ang Panday 2, co-produced by Imus Productions and GMA Network, started out strong with its P51.5 million gross during its first three days in cinemas. As of January 1, the action-adventure film reached ticket sales of P86.3 million.

Another shake-up took place when My Househusband: Ikaw Na! moved up to fourth place, replacing the slot previously occupied by Shake Rattle & Roll 13.

The star-studded horror flick, Shake Rattle & Roll 13, was originally in 4th place with its P22.75 million gross at the first three days of the film fest. Its box-office earnings have since grown to P41.9 million but it now ranks lower at 5th place.

My Househusband: Ikaw Na! was previously ranked 5th with its P20.83 million gross. To date, the family dramedy, starring Ryan Agoncillo and Judy Ann Santos, moved up to 4th place with P42.58 million.


Manila Kingpin: The Untold Story of Asiong Salonga, topbilled by ER Ejercito, grossed P7.95 million during the first three days of the MMFF. As of January 1, this figure grew to P31.78 million.

According to official figures from the MMFF Execom, the family drama, Yesterday, Today, Tomorrow, was in 7th place with its P4.08 million gross. This Regal Films movie starring Maricel Soriano and Gabby Concepcion, among others, has now reached the P7.35 million mark.

The 37th Metro Manila Film Festival will run until January 7, 2012.