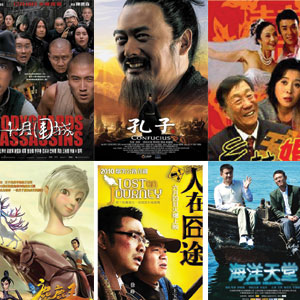 The Spring Festival is another term for the Chinese New Year, the most significant of the Chinese traditional holidays. It is often celebrated for two weeks in China, and a week for the Chinese in diaspora. The Year of Dragon will be officially ushered in on January 23, 2012.

In line with the occasion, the 6th Spring Film Festival is set to screen six Chinese films from January 20 to 29, 2012 at the Shangri-La Plaza Mall's theatre. The annual event, a break from the domination of the Hollywood movies, will present a mix of old and modern films, of various genres. The ten-day film festival is an effort to promote the richness of the Chinese culture, as well as to remind Filipinos that they are more Asian by blood than they are Western.

Among the films selected from a list suggested by the Chinese Embassy is Bodyguards and Assassins, which won Best Picture at the 2009 Hong Kong Film Awards. Its director, Teddy Chan, offers a historical account replete with action especially when the story reaches its ending.

Bodyguards and Assassins takes place in 1905 Hong Kong when the island was still kept as a colony of Britain. The Chinese revolutionary Sun Yat Sen was, during that time, slated to discuss and unite a group of leaders in Hong Kong. His call to topple down the corrupt Qing Dynasty echoed democratic revolution which was supported by the Chinese people. Knowing how important it is that Sun Yat Sen be protected from hired assassins by the Qing dynasty ruler Dowager Cixi, commoners from Hong Kong merge in a special mission.

Led by businessman Li Yutang, the group was composed of common people (an ex-monk-turned-tofu-vendor, an orphaned martial artist, a beggar, a rickshaw puller, etc.) who have never seen battle in their lives. The film portrayed patriotism as the commoners sacrificed their lives for China's liberation.

The family drama Ocean Heaven stars Jet Li sans his fighting form. This film won the superstar martial artist a Wen Zhang Best Actor Award (2010). It cast him as a dying father of an autistic child. The story narrates the trials Wong (Jet Li) undergoes as he fights liver cancer and his fear of leaving behind his child.

The domestic drama Country Wedding, meanwhile, tells of an engaged couple and the pains they take in planning and organizing their wedding. Their dilemma comes in when they have to decide between wedding in the countryside or the city since the groom hails from the rural while the bride grew up in the urban area. The film exposes a Chinese culture clash which is further instigated by their folks who insist on their own wishes.

Lost on Journey is a comedy that narrates the misadventure of Li Chenggong who tries to reach his family in time for New Year's Eve. His journey is that of misfortunes and finding a friend whom he meets along the way.

The biographical drama Confucius stars the famous Asian actor Chao Yun-Fat as the Great Sage. While Confucius was highly regarded by the Chinese for his teachings, the film focuses on his life- the struggles he underwent during the time China was in chaos and ruled by a corrupt dynasty.

To showcase that China is at par with the world in terms of the technological advancements in filmmaking, the festival includes King of Milu Deer, a Chinese 3D animated film that proved to be a box-office hit in China. With an underlying message about environmental conservation, King of Milu Deer is about Yoyo, a white milu deer who turns into a lady and befriends Tzan, the Prince of the Kingdom of Clouds and Dreams. In the story, Tzan was commanded to search the Labyrinth Mountain to hunt for a milu deer and sacrifice it to end the drought of their kingdom. In his journey, the prince discovers the beauty of nature in the Labyrinth Mountain and through his new found friend Yoyo.

Catch the free screening of these six films at Shang Cineplex Cinema 4 from January 20 to 29, 2012.