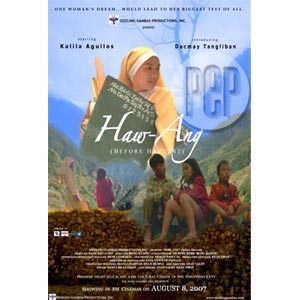 Kalila Aguilos plays an idealistic young nun in Haw-Ang (international title: Before Harvest). This indie film boldly explores the human side of a supposedly chaste nun and setting a heartwarming tale in the breathtaking beauty of the Ifugao rice terraces.

The independent film Haw-Ang (international title: Before Harvest) is now being hailed as a classic in the making—in the same league as Sister Stella L, the controversial political film of award-winning actress Vilma Santos. Although Haw-Ang takes place amid the world-renowned Ifugao rice terraces, in contrast with the noisy streets in Sister Stella L, both films share similar qualities—the message of serving the people and the commitment of the main characters, Sister Stella L and Sister Adel, as servants of God.

Sister Adel's story is told through the eyes of a young Tuwali girl named Dacmay. She is the witness to Sister Adel's sacrifices for the indigenous people—starting from the nun's hard trek to reach a remote Ifugao tribal town, gaining the trust of the people, especially the children who hardly receive formal education, teaching Christianity to a community that has its own beliefs, fighting the mayor for a small school. In the middle of all this is Sister Adel's dilemma: will she break her nun's vows as she falls in love with a rebel soldier?

Set in the breathtaking Hungduan rice terraces in Ifugao, Haw-Ang primarily campaigns for quality education for the youth, while delving into the different modes of "learning" that has shaped various characters as well. Although the storyline is fictional, the themes explored in Haw-Ang faithfully mirror social reality.

"The landscape and the weather was a challenge. We had to trek up and down the basin of Hungduan almost everyday to shoot. It was cold, especially when it rained. We were many in a small living space. We were away from our families for long periods of time."

Kalila admits she had the jitters before the shoot of a love scene. "It's never comfortable to strip in the midst of camera crew and act out intimate scenes. At least, Neil [Ryan Sese] is my friend, which made things a bit easier."

When nuns watched the movie, some reportedly walked out on the scene of Sister Adel and her rebel soldier-lover having sex. Others were either unimpressed or they viewed it with an open mind.

The Movie and TV Classification Board approved the film without cuts and rated it PG. It is also endorsed by the Department of Education-National Capital Region. Haw-Ang will also be released worldwide.