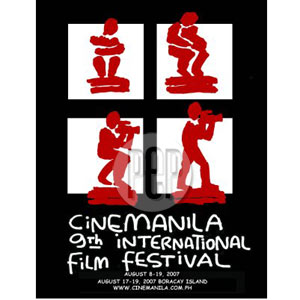 The 9th Cinemanila International Film Festival (CIFF) opens tonight, August 8, at the Gateway Mall in Cubao. The festival will run until August 19. The island of Boracay will also serve as a venue of the CIFF from August 17-19, 2007.

Since 1999, the Cinemanila International Film Festival (CIFF) has given film audiences in the Philippines the opportunity to watch films from various parts of the world. This year, the 9th CIFF is proud to announce that it will be featuring over 100 films from 40 countries, including Denmark, India, Spain, South Africa, Sweden, Turkey, and member nations of the ASEAN.

Among the international films will be several past winners in the Berlin and Cannes film festivals, such as the Palm D'Or winner at Cannes, 4 Months, 3 Weeks & 2 Days; The Edge of Heaven, nominated for the Palm D'Or and winner of Best Screenplay; South African film U-Carmen eKhayelitsha, Golden Berlin Bear winner in 2005; and Pedro Almovodar's critically acclaimed Volver.

Gateway Cineplex 10 is the chosen venue of this year's Cinemanila Film Festival. The venue is known as the country's only Cineplex with stadium seating and Boral acoustical walls. Gateway Mall is located at the Araneta Center, a lifestyle and entertainment hub right at the heart of the metro.

Quentin Tarantino will make several special appearances during the entire run of the 9th CIFF, which will also be holding a series of seminar-workshops on indie filmmaking, directing, scriptwriting, film archiving, among for aspiring filmmakers and enthusiasts. The jury head of the Cannes Film Festival last 2004, Quentin's love for Asian films has inspired him to adapt of various cinematic styles from films of the region in his own movies. His admiration for Asian cinema has made him one of its most significant advocates, thus making him a most worthy recipient of Cinemanila's special citation.


NOTEWORTHY LOCAL FILMS. Select Filipino films will be exhibited in line with Cinemanila's goal to revive the Philippines as the hub of Southeast Asian Cinema. Chosen Filipino films from 1999-2007 will be shown as part of its non-competition films exhibition. The list includes nine best films each from the following categories: Filipino (35mm) and Filipino (digital).

For the schedule of screenings, visit http://www.cinemanila.org.ph/2007/03schedule.html