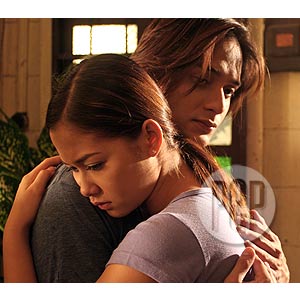 Maja Salvador plays Kat, a young girl who is possessive of her brother Jeff (played by Ryan Agoncillo). She tries her best to prevent Jeff from tying the knot in the Regal Entertainment film My Kuya's Wedding.

Maja Salvador, on the other hand, is paired with her First Day High co-star Jason Abalos.

This movie also marks the first venture of Topel Lee, a University of the Philippines and Mowelfund film scholar, into the genre of mainstream romantic comedy.

In My Kuya's Wedding, Ryan plays the loving brother Jeff who is very close to his sister, Kat, portrayed by Maja. Pushed by poverty and the desire to give his sister a good college education, Jeff goes to Riyadh to work there for four years, vowing to return home only when he has enough money.

Kat's anticipation of a happy reunion with her Kuya Jeff turns sour right at the airport when she meets his fiancée, Heidi (Pauleen). Kat's jealousy is heightened when she discovers her brother's utmost dedication to his girlfriend.

Beset by rage, Kat vows to thwart her brother's marriage with the aid of her gay bestfriend, Vi (IC Mendoza). But as she plunges herself into her devious plans, Kat finds herself reluctantly falling in love with Aris (Jason Abalos)—a reality show evictee who happens to be Heidi's brother.

Kat's dilemma becomes more complicated as she tries to resist two nagging issues: Her brother's impending marriage and her refusal to fall in love with the brother of her sworn enemy.

"One of the things that lured me to doing this film is the script. Pagbasa ko pa lang, gusto ko ng gawin! I quickly read the script from first sequence to the last. I laughed and cried. It's really very touching," revealed Ryan.

Playing a doting brother to pretty and talented young actress Maja Salvador is also not a problem according to Ryan. "It was easy to play a brother to Maja because she's a very sweet girl," he explained.

Find out if Kat succeeds in ruining the wedding plans of her brother Jeff. My Kuya's Wedding opens in theaters nationwide starting August 29.