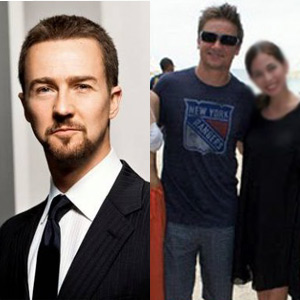 Edward Norton (left) and Jeremy Renner (right) are currently in the Philippines to shoot scenes for the spy thriller The Bourne Legacy. Jeremy was photographed in Boracay during one of the breaks of the movie.

According to MJ Marfori's report for Interaksyon, hundreds of foreign extras and soldiers gathered at the fortified city to recreate a civil war scene in South America.

The said report also indicated that Raymond Gutierrez, Georgina Wilson, Karla Humphries and Solenn Heussaff were spotted in Intramuros. Georgina and Solenn have previously expressed their admiration for the Hollywood actor through their Twitter accounts.

Oscar nominee Edward Norton has appeared in critically acclaimed films such as Primal Fear, American History X and The People vs Larry Flynt.

The cast and crew of The Bourne Legacy are expected to shoot scenes in Pasay City this Friday, January 27.

Marie Lozano of ABS-CBN revealed that the sequences to be shot this weekend include scenes at the MRT and a footbridge along EDSA that will reportedly make use of 1,500 extras.

Another A-list Hollywood actor, Daniel Craig, stayed briefly in the Philippines to meet with his wife, Rachel Weisz. According to Interaksyon.com, TV5′s online news portal, the James Bond actor arrived at the NAIA Terminal 1 on Friday night and left on January 25.