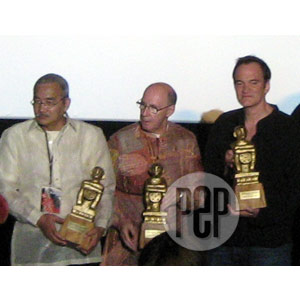 (From left) Prince Chatri MC Chatrichalerm Yukol, Robert Maleangreau, and Quentin Tarantino were given the Lifetime Achievement Award during the opening ceremonies of the ninth edition of Cinemanila that took place in Gateway Mall, Cubao, last August 8.

As soon as Quentin Tarantino appeared in the cinema lobby of the Gateway Mall, Cubao, last August 8, fans and members of the press fawned over him—all wanting to get photos, videos, and/or autographs of the Hollywood director.

With the popularity of his films Kill Bill and Pulp Fiction, it's no wonder that the arrival of Tarantino in the country is a very big deal. What's even more amazing is the fact that coming here to the Philippines is actually fulfilling a childhood dream for the American writer-director.

"From growing up and watching Filipino movies and all the ones that were released in America, I've had a connection with Filipino cinema," he confides during his acceptance speech at the Cineplex 10 of Gateway Mall. "It's always been a dream to come here. And to actually come here and not only bring my movies but actually to be able to bring back some 35 millimeter prints of some of these Filipino films and show them here and present them to you all, it's wonderful!"

Tarantino was giddy with excitement when he told the audience about his encounter with National Artist for Film Eddie Romero earlier that day. "I actually met Eddie Romero for the first time today and it was very wonderful. I was meeting a piece, of not only Filipino cinema history but [also] a piece of planet Earth's history.

"It actually made me think of the first Filipino movie I've ever seen at the theater. It was an Eddie Romero movie and I was 7 years old. My grandmother took me to see it and it was the Twilight People," he recalls.

Tarantino was one of the three recipients of the Lifetime Achievement Award given out by Cinemanila this year. The American writer-director was honored for "making ground-breaking films and his fondness of Asian cinema...he is also an aficionado of Filipino films and has a collection of Cirio H. Santiago movies."

Robert Maleangreau, director of the Belgian Independent Film Festival, received a Lifetime Achievement Award for his promotion of Asian films in Europe. Prince Chatri MC Chatrichalerm Yukol, on the other hand, is cited for making iconic productions in his home country, Thailand.

Cinemanila festival director Amable "Tikoy" Aguiluz VI revealed to PEP (Philippine Entertainment Portal) that he first invited Tarantino to the Cinemanila International Film Festival (CIFF) three years ago but it did not materialize. Now that the Hollywood director is in the country, he will be giving a directing workshop at the Gateway Cineplex 10 Cinema 4 on Saturday, August 11.

The hosts of the program were Jaclyn Jose and Gabe Mercado, who was wearing a red Barong Tagalog and a native straw hat. Angel Aquino was supposed to be Gabe's co-host but she was stranded by heavy rains that night, which is why Jaclyn pinch-hit for her.

World beat artist Cynthia Alexander performed her song "Comfort in your Strangeness" as a way of welcoming the foreign guests to the country.

After conferring the bulol trophies to the Lifetime Achievement awardees, the epic film King Naresuan directed by Prince Chatri was screened at the venue.

The Cinemanila film festival, which takes place until August 19, will screen a hundred movies from 40 countries at the Gateway Mall in Cubao.