Behind the scenes of "Tribu" 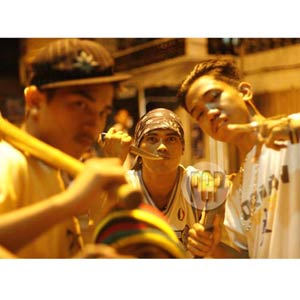 Jim Libiran (not in photo) wrote, directed, and produced the Cinemalaya 2007 Best Film Tribu, which tackles the warring gangs or "tribes" of Tondo, Manila. It is also the first Cinemalaya entry to take part in this year's Cinemanila, which is ongoing at the Gateway Mall in Cubao.

Tribu started as a thesis proposal in completion of a master's degree. Later, it earned a Palanca award (second prize) for Best Screenplay in 2006. A year later, it bagged the Best Film, Best Actor and Best Sound awards in this year's Cinemalaya International Film Festival. In October, this gritty film on Tondo's gangs will participate in the Pusan International Film Festival in South Korea.

Jim Libiran—currently the head of ABC-5's news and public affairs department—is the producer, writer, and director of this indie film. Cinemalaya jurors lauded the film "for its grand and graphic depiction of contemporary Tondo, Manila, its raw passion and searing violence, its terrible social conditions and conflicting social mores, and its people's coruscating embrace of both the sacred and the profane, the filial and the tribal, the tender and the vicious."

Cinemalaya describes Tribu as showing "the darker side of Manila-by-night, where pubescent gangs, or "tribes," roam the streets looking for quick fixes and cheap thrills. Here, Manila's working class district of Tondo throbs to the beat of hip hop and freestyle gangsta rap, while panoramic poverty is spray-painted like a multi-colored graffiti of promiscuous sex, crack heads, and alcohol-induced street battles. Through the eyes of ten-year-old Ebet, we witness the deadly lives of teenage gang members in Tondo and the events that lead to their explosive confrontation."

2007 Cinemalaya's Best Film Tribu received as many nods as smirks from its viewers. PEP (Philippine Entertainment Portal) compiled a list of the most popular criticisms against the film, and threw it back at Direk Jim. A true sport, the director took each jab graciously and answered each question with more stories to think about.

He narrates that he was able to convince 52 gangsters from six warring Tondo tribes to audition. "Maybe they just wanted to do something creative. Something substantial. Something different than what they usually do, reason why they responded to the call of the camera," he speculates.

"I think using real gang names won't work for the film. My point is, whatever name they take on, the experiences remain the same," explains the writer-director. He reveals that the real names of the Tondo gangs cast in the film are True Brown Style, Dog Pound Gangsta, Problem Child Society, Puerto Rico, Capulong Thugs, and the rap groups Sigaw ng Tondo, 187 Mobstazz, Intensity and Dream.

Viewers comment that the film echoes scenes from Brazil's film City of God (2002), but Jim denies the comparison. "I grew up in Tondo, and the film was inspired by the people of Tondo. When I watched City of God, my first reaction was, ‘Ang bakla naman nito! May mas astig pa diyan.'"

PROFUSE VIOLENCE. No doubt, the film teems with violence. Jim offers a story to counter the criticism. "I've seen a movie approved by MTRCB [Movie and Television Review and Classification Board]. I believe it was given a PG-13 rating. It was about this teacher, a street guru, who was convicted. The police picked him up, showed him the torture paraphernalia, beat him to death, crowned him with thorns, and still not contented, nailed him to the cross. Too much violence? Why didn't the viewers complain then?"

Jim is, of course, referring to the story of Jesus Christ and his brutal death at the hands of the Jews.

Jim even likened this kind of viewer bias to a dark underbelly that people choose to ignore. When brought to their attention, people deny it or react vehemently. In the same way, Tribu's violence mirrors a reality often ignored or taken for granted. Now that the ugliness is exposed, viewers cry foul.

"I feel bad, actually. Because of insufficient funds, I failed to faithfully show the brutality that actually happens in the streets of Tondo." Jim says that on the night the movie was shown in the University of the Philippines last August 4, his lead actors were grieving. One of their friends bumped into an ex-con addict and was stabbed on the shoulder. According to Jim, the victim was carrying a gun, but failed to use it.

"How can it glorify gangs when they all ended up dead?" Jim snaps back at comments that the movie deifies gang culture and therefore, cannot be shown to kids. He quoted one of his cast members, a real Tondo gangster, as a way of defending his film, "OG Sacred said, ‘If I had watched Tribu when I was a kid, I would never have joined gangs.'"

PURPOSE OF THE FILM. Should the MTRCB find the film too violent, the Tondo native can only feel sorry for cinemas that will not profit from Tribu, and the gangster-wannabes who will not be warned of the danger of pursuing this ambition.

"My main goal is just to create the film after the script, after its original purpose. Anything that happens after—the best film, best actor and best sound awards—are but bonuses."

Tribu also paved way for a LIRA (Linangan sa Imahen Retorika at Anyo) workshop for four Tondo rapper-gangsters who starred in the film. They are now into their second month of once-a-week classes under the auspices of National Artist for Poetry Virgilio Almario. To further motivate the budding poets, LIRA shouldered their weekly transportation fees. The students were also challenged to pay P500 should they fail to complete the course given to them for free.

Asked whether these rappers-turned-poets are still part of the gangs in Tondo, Jim gives a resounding "Yes!"

"I told them that they should not leave their respective gangs. Especially not now, when little ones look up to them. Not now, when they have gained lots of realizations. Gang ka pa rin, leader ka pa rin. And you should be a stronger leader now because the younger generation looks up to you."

The first Cinemalaya crossover film, Tribu is now part of the Cinemanila festival and will be shown in Gateway Mall this Tuesday, August 14, at 9 p.m.