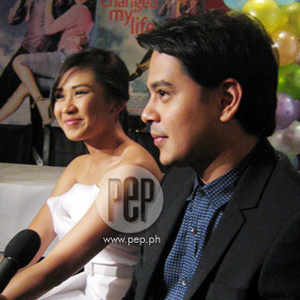 This photo of Sarah Geronimo and John Lloyd Cruz was taken during the cast party of their previous movie, You Changed My Life, which was released in 2009.

The tandem of John Lloyd Cruz and Sarah Geronimo will once again thrill fans as the two reunite for the upcoming movie titled It Takes a Man and a Woman. John Lloyd and Sarah will reprise their roles as Miggy and Laida in the third installment of this popular franchise.

Both celebrities said that a lot of changes have already happened to the lives of Migs and Laida.

Do they feel pressure to match the success of their two previous films, A Very Special Love and You Changed My Life?

BOX-OFFICE SUCCESS. A Very Special Love was shown in 2008, followed by its tremendously successful sequel, You Changed My Life, shown in 2009. Both movie were directed by Cathy Garcia-Molina.

In A Very Special Love, Sarah plays the role of Laida Magtalas, a kind-hearted young woman who works hard to provide for her family. Meeting and working for her so-called "Prince Charming" in the person of Miggy Montenegro (John Lloyd) changed their lives forever. Laida worked as an editorial assistant for Mig's magazine called The Bachelor, which his family owns.


The movie earned P180 million at the tills. For this reason, John Lloyd and Sarah were hailed as Box Office King and Queen of 2008.

Their second movie, You Changed My Life, also became a certified hit with its gross of P209 million. Once again, both celebrities clinched the title Box Office King and Queen for the second time.

These romantic comedies were co-produced by Star Cinema and Viva Films. The third installment of their movie is expected to be released by June or July 2012.