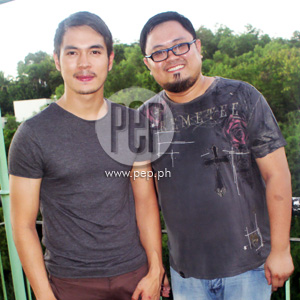 Starring Jake Cuenca (left), horror-drama film Anino will uncover a group of teenagers' and adults' past, present, and future demons as they go on a spiritual retreat, in the hope of finding inner peace. Director Rahyan Carlos (right) says that despite the terror that the film will pull off, Anino is more of a drama than a thriller flick that aims to showc

At the set visit of Anino held at the old-fashioned La Brisas Hotel in Antipolo on February 29, 2012, a lot of young talents were present. They were a mix of teenagers, boys and girls, who happen to be the new batch of Star Magic's aspiring talents.

Anino will be the first digital output of Star Magic—a full-length narrative in high definition which casts a new breed of artists fresh from a series of audition-workshops conducted since October 2011.

"We started the workshop since October of 2011 and for four months of intensive training, we have five batches of workshoppers [whose age] range from 13 years old to 60 years old," tells Direk Rahyan.

He confirms that, yes, hopefuls include not only young adults but adults as well. He cites the mother of newbie artist Young JV as among those who auditioned and topped the roster of Star Magic's pool of new aspirants.

"Kaya nga lang ang output namin for the digital would be for the teens and adults.

"And this time, sa interview pa lang, sinasabi na namin na, 'You need to earn your role, based on your performance during the class sessions."

Anino's script was co-written by Direk Rahyan and Gina Marissa Tagasis from six years back.

"We tailor-made it for the workshoppers, thinking that I have 160 actors to squeeze it in. Parang Ten Commandments ang peg nito!"

Anino, slated to premiere on March 19, is about a group of young yuppies and adults who go on a retreat to confront their personal struggles from the past, present, and future.

"Those issues will manifest in a horror way," says Direk Rahyan.

Direk Rahyan is becoming known for the horror films and shows he has created in the previous years. His works include Pamahiin, the Regal Shocker remake series aired on TV5, Sineserye's Florinda episode, also 13th Floor which is a segment from Shake Rattle and Roll 8.

What drives him create horror films?

"I like horror but more than anything..." explains Direk Rahyan, "Yung horror na ginagawa ko naman, laging may redemptive value. Laging may natututunan.

Direk Rahyan mentions that of the films he produced, Anino excites him.

While they had to do with a small budget—much like creating an independent film—it is his first time to utilize a set of Canon DSLR (digital single-lens reflex) cameras for filming.