Jake Cuenca will be part of Star Magic's horror-drama, Anino 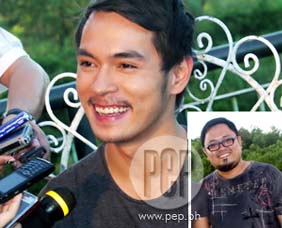 "The good thing kasi with Jake is [that] nandun yung hunger niya to learn. Meron siyang konsepto ng 'Acting is a lifestyle of learning.' Napaka-open niya." Anino director Rahyan Carlos (inset) has worked with Jake Cuenca (main photo) eight years back in thriller-drama Kilig... Pintig...Yanig. Fast forward to present day, the filmmaker can attest to the actor's perseverance to be a better artist: "To be honest, andun yung puso

In celebration of its 20th anniversary, Star Magic's workshop and training department is producing its first digital film, Anino. The horror-drama, directed by Rahyan Carlos, is a special project that gives a chance to the ABS-CBN talent center's new generation of stars to work with professional actors Jake Cuenca, Jodi Sta. Maria, Dimples Romana, and Joem Bascon.

According to Direk Rahyan, about 2,000 kids, teenagers, and adults fell in line last October 2011 when they opened a public workshop. 300 hopefuls made the cut—half of which stars in Anino. The screenplay, written by Direk Rahyan and Gina Marissa Tagasa six years back, was tailor-made to fit in 160 cast members.

Apart from these talents who were selected based on how well they performed during the class sessions, actors such as Jake will be featured in the said film.

Anino tells the story of a group of adolescents and adults who go on a retreat aiming to confront their personal conflicts but end up being haunted by their past, present, and future issues.

Main actor Jake Cuenca is more than glad to be a part of the said project. It was Star Magic's main man Johnny Manahan who asked Jake to lend his improved acting in Anino.

Jake recalls being an amateur actor himself who was immersed in workshops.

"Ganun ako nagsimula, e, as a workshopper..." Now he leads a pool of new talents under the direction of Rahyan.

"E, ano lang naman siya, three days lang and with Direk Rahyan Carlos pa, I mean, how could I say no, 'di ba?"

Direk Rahyan got to work with Jake in romance-thriller Kilig... Pintig...Yanig, a 2008 movie wherein Jake was teamed up with Chynna Ortaleza.

While Jake's character is a significant element in Anino, he says that the main role belongs to the new talents.

Does this mean that Jake is doing the project for free?

"A, ganun ba?" Jake laughs off the question.

"Pero siyempre this is for the love of Star Magic talaga. Yun naman yun."

Jake shares that he was surprised by the talent that he witnessed during the shooting days.

BEING A CHARACTER ACTOR

Direk Rahyan, having witnessed Jake start out as an actor, describes how Jake is now faring as an actor.

The 25-year-old hunk was recently nominated by the Philippine Movie Press Club (PMPC) in the Best Movie Supporting Actor category for his performance in In The Name of Love. Jake was also nominated at the 37th Metro Manila Film Festival as Best New Wave Actor for his role in HIV.

"He keeps on improving. To be honest, andun yung puso niya para matuto.

Indeed, Jake has been evolving as an artist. In 2011, apart from the aforementioned projects, the actor was seen in primetime soap Green Rose where he starred alongside the pair of Jericho Rosales and Anne Curtis. Last year, Jake played a lead role in sexy-drama film My Neighbor's Wife in which he co-starred with actors Lovi Poe, Dennis Trillo, and Carla Abellana.

What has kept Jake driven to become the actor he is now?

"I think Direk Rahyan put it, I mean... it just goes to show that he really knows me. He met me when I was starting out, nung nagsisimula pa lang ako... And then siyempre, he works with me now.

"I just have this willingness to learn and I just want to keep learning and I want to study people."

Jake finally shares the secret to honing his craft: "I normally got out and I just observe people. I observe my friends.

"And siyempre in every role that I do, as much as possible gusto ko iba- iba yung itsura. Like now I lost weight for my role, I got darker.

"I'm more into being a character actor and I enjoy that. I enjoy being different people."