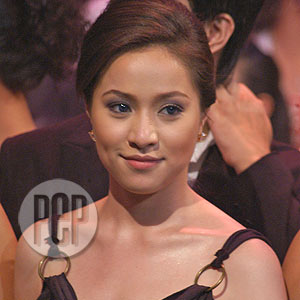 Cristine Reyes raised issues against the director of Green Paradise and instigated a halt to the shooting of her supposed launching movie.

Rising sexy young actress Cristine Reyes would rather not launch her movie at all than promote a half-baked production.

Philippine Entertainment Portal (PEP) caught up with Cristine last Sunday, August 12, during the anniversary of GMA's Artist Center held at the Broadway Centrum in Quezon City. She was trying to relax backstage after doing a sexy production number.

We asked about her supposed launching movie, Green Paradise, and the circumstances that led her to drop the film indefinitely.

"Ang pangit nung outcome," jumpstarted Cristine. She had watched the film's rushes and could not help but feel disappointed after viewing the clips.

Cristine is still unsure about what will happen next, although a meeting was reportedly set to make drastic changes that would surely be implemented by the producer, particularly by the production unit.

"Wala namang problema sa producer," Cristine quickly clarified. "Ang problema, production. Ayokong isisi nang isisi sa director," she commented when quizzed about her issues with the director. But she once more reiterated the director's drinking habits during shoots, in spite of preferring to keep mum to avoid further issues.

A re-shoot is necessary but Cristine said that there are still some scenes that would most likely be retained and used.

The younger sister of actress Ara Mina also lashed out against her critics who raised their eyebrows and accused her of stalling and pulling stunts to delay the project.