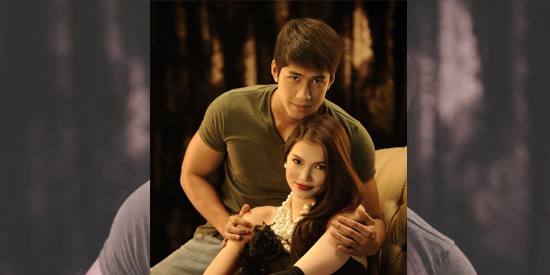 Rarely does a villain seize the hearts of viewers. As Filipinos love its teleserye protagonists to move them to tears, so does it find an effective antagonist in a ruthless, spiteful character—one that would not hesitate to give the lead character a compelling slap in the face or a good catfight replete with all that hair yanking.

Basically, a "bida" is pitiful as a "kontrabida" is loathed with fervent passion.

Director and writer Jade Castro's My Kontrabida Girl exactly toys with the stereotype of the ultimate "kontrabida." It succeeds more as a comedy than a romantic flick as it centers on how its main character, a teleserye kontrabida, loses her knack for being the meanest, most despicable teleserye villain on Philippine primetime television.

Rhian Ramos plays Isabel Reyes in the film whose disastrous childhood turns her into a cynical person. Isabel grows up to be contemptuous and being naturally nasty she achieves superstar status by playing the cruel Dominique in a top-rating show "Sa Dibdib ng Galit." She acts alongside the soap superstar Marian De Mesa (Gwen Zamora) who hates her even more on screen than off screen. In fact, in the showbiz world presented in My Kontrabida Girl, Isabel is despised by everyone who knows her. She is notorious for her brutal frankness, "I-want-I-get" attitude and she gets away with it so long as her "kontrabida" prowess keeps the soap number one on primetime.

Isabel's character takes a heavy lashing from fate when she meets an accident. The interesting part about it is that a lone garbage collector (a "basurero") actually saves her from being hit by a rushing vehicle as she was crossing the street. While she tries her best to repay his heroism, the man hesitates to be rewarded. This selfless act moves Isabel and for some reason takes away all her pessimism and contempt in life. She thus loses her sole purpose and becomes inept for her role. Desperate to bring back her "skill" she tries to seek help from Philippine entertainment's renowned 'kontradida' actresses Cherie Gil, Maritoni Fernandez, and Gladys Reyes who all point her to the mother-of-all-villains, the one and only Bella Flores.

The story takes a huge turn (and becomes an even more hilarious ride) as Isabel tries to follow Bella Flores' guidelines to becoming an effective antagonist. Her first rule? Recall and keep in mind the one person who makes you very, very, very angry.

In Isabel's case, it is Chris Bernal (Aljur Abrenica), her childhood best friend, who made her life miserable. It becomes exciting when Isabel goes back to her hometown in Palawan to recall how Chris did her wrong and to regain her aptitude for being a kontrabida. The film reaches its highlight when Isabel, aided by her loyal personal assistant (Chariz Solomon), executes her plan to take vengeance on Chris.

During the film's climax, My Kontrabida Girl's "romantic" aspect comes in and where Aljur's sculpted abs compensates for his premature acting skills (although the heartthrob tends to be over acting, too).

My Kontrabida Girl is an entertaining, laugh-out-loud comedy more than it is an effective romantic film. The reason behind this is that apart from Rhian and Aljur's contrived chemistry, Jade Castro's plot is a more endearing tale on how friendships are broken and fixed again.

It is moving when it tackles how Chris once broke a promise to Isabel. When they meet again a few years later, it becomes all the more heartbreaking when Chris and Isabel come to the realization that perhaps their friendship was never meant to be repaired again. More than finding love, the heart of the story is forgiveness and giving people a second chance.

Rhian Ramos proves fitting for the role of Isabel as the character perfectly displayed her range in comedy and drama. For a kontrabida, the gorgeous Rhian is a character to love. A remarkable scene in the film is when she as Isabel finally sheds tears—because she doesn't at all—in front of national television and apologizes to the people she hurt, especially Chris.

One genuinely feels the pain of Isabel when she says, "When you hurt the one you love, you hurt yourself." If anything, it is her hard-hearted character's journey to discovering the genuine emotion of "hurting" and "feeling towards others" that becomes poignant in the film. Rhian is able to deliver that much.

Besides the script's remarkably side-splitting punch lines, the supporting roles of Chariz Solomon, Bea Binene, and the wacky gang of Enzo Pineda, Sef Cadayona, Kevin Santos, and Ken Chan add spice to the flavorful serving that My Kontrabida Girl is. It would be proper to mention likewise that Bella Flores' (as herself in the film) craft that resulted to her being the kontrabida icon of the Philippines is given (over)due recognition. Much, much respect to the veteran actress.

All in all the film is an entertaining watch and at its best when it makes an audience realize that there is more to antagonists/villains/kontrabidas. They are human more than we know it.

My Kontrabida Girl is currently being screened in cinemas nationwide.