Gwen Zamora does own stunts in Indonesian horror-suspense The Witness 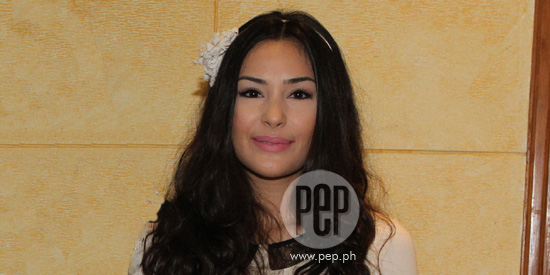 Gwen Zamora is the only Filipina actress cast in the international horror film titled The Witness. It will be screened in Philippine cinemas starting March 21, 2012.

Indonesian director Muhammad Yusuf says that Filipina actress Gwen Zamora was specifically chosen for the title role of The Witness for her "sad look." He and executive producer Sarjono Sutrisno want their horror-thriller film to come off "as real as possible."

The half-Filipino, half-Australian Gwen's expressive eyes and soft features are apt for the tragic and troubled character of Angel Isagani whose immigrant family residing in Indonesia is murdered.

Most of Gwen's scenes included in the trailer show the actress hysterically crying, if not quietly sobbing as she lies down in a hospital bed, an oxygen mask across her face.

Gwen's character in The Witness likewise encounters hallucinations and dreams that repeatedly take her to an incident where a man commits suicide.

The 21-year-old actress makes an abrupt shift from her current projects— a "kontrabida" role in GMA-7 primetime soap Biritera and comedy stint in gag show Bubble Gang— to this said horror film. Gwen did not veer away from the challenge of the lead role in The Witness despite the pressure, the expectations, and tough task at hand.

"Well, you can't prepare yourself for horror. You can't psych yourself all the time. Cause then you'll be like... on the edge all the time!" says the actress who spent a month and a half, July to August, in Indonesia.

She recalls, "I read the script and then on the few days that I was in Indonesia and was being introduced to the producers and to the directors, I was asking what they wanted, yung parang ano [ba] yung vision nila?

"Kasi only the director can tell me that. No matter how many times I read the script or do my character analysis, his vision is still key.

Gwen stresses how genuine the fear was for her, especially in specific scenes.

"I feel it was genuine because it was really scary!"

She describes the suicide scene, "That part where he shoots himself in the head? It looks, honestly, on my point of view, it looked real!

"The explosion was ... behind his head and he had an afro, so hindi kita. It was all covered.

"And when it actually happened, the sound [and] the smell of it—" Gwen stops and lets out a shriek.

"And then it went in my mouth pa!" she continues.

The scene where Aris, played by Indonesian actor Agung Saga, commits suicide by pulling the trigger with the gun cocked in his mouth, was in fact rehearsed ten times before they actually filmed it. Gwen mentions how differently she envisioned that scene in her head and how it came out more terrifying than she imagined.

The scenes were heavy and compelling, it amazed Gwen how she got carried away a few times.

A mishap occurred while they were shooting one particular scene.

"I fell down... because I got carried away, bigla akong nahulog." The next thing she knew, her body landed on the steps of a stairway.

"The space was so small, nawala ako [at] nahulog ako!"

Despite the exhausting role, Gwen expresses how rewarding the experience was. "I loved it! I love how I got to run everywhere, I got to do my own stunts!"

Yes, the beautiful Gwen Zamora refused a double body while shooting The Witness. She went ahead and said "No!" after her co-actor Marcellino Le frandt, who plays detective Indra, suggested that she get someone else to do the stunts.

She embraced the project, taking the (literal) pains that went with it.

"I feel super blessed and thankful. Blessed because, you know, not so many people [can say], 'Uy I'm doing a movie abroad.' Yung mga ganun.

"And thankful because they gave me the permission and they accepted it so well kasi some other people might [say], 'Oh no.'

Another Skylar Production and GMA Films collaboration is currently in the works with an action-drama film slated to come out in May 2012.