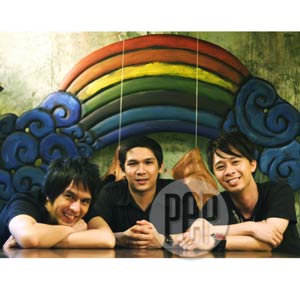 "The last thing I want is to be in a band with someone who's not happy. So whatever [Rico Blanco's decision] is, I will accept. Kahit mahirap," says Rivermaya drummer Mark Escueta (middle, with band members Japs Sergio and Mike Elgar).

Months after the much-publicized departure of Rico Blanco from Riverymaya, the remaining band members talk about this development during the band's mini-presscon held last August 11 at Mogwai Bar and Café in Cubao's Marikina Shoe Expo.

The intimate get-together was actually held to introduce Bagong Liwanag , the 5-song EP from Rivermaya (sans Blanco). A few weeks before, the band's ubiquitous manager, Lizza Nakpil, released a statement that said Rico's explanation of his departure from the group was "inconsistent with the facts."

Except for the said statement, little was heard from the band members themselves in the media. That the three—Mark Escueta, Mike Elgar, and Japs Sergio—would be bombarded with questions about their personal take on their former vocalist's exit was totally expected. After all, everyone involved in the breakup kept mum and treated the issue with admirable albeit frustrating diplomacy. But that's as far as mainstream media is concerned. Online, fan forums and music message boards kept fans, friends, and foes privy to the genuine sentiments of the band.

However, two months have gone since this drama first unfolded. This time, cooler heads and even laughter prevailed. Mark, who has been more vocal in his intense displeasure at Rico since the breakup, has decided to let go of the issue.

"I don't think about it too much anymore. Nangyayari kasi, may mga tao talaga tayong nakikilala na kung minsan, iba na 'yung gustong gawin," he says, referring to his ex-bandmate. "The last thing I want is to be in a band with someone who's not happy. So whatever [Rico Blanco's decision] is, I will accept. Kahit mahirap."

He then differentiates Bamboo's and Rico's exit from the band. "The difference was Bamboo's departure was a lot clearer for everyone. Malinaw 'yung mga rason niya and he gave us enough time to prepare. This time, it's the opposite," he laughs dryly.

While Mark and Mike are no longer on speaking terms with Blanco, they admit that they've had their share of friendly moments. Mike rationalized, "Sa 'min ni Japs, [we had] six years [with Rico]. And for Mark, fourteen years [of friendship] is fourteen years."

"I can [just] forget all that," Mark confirmed. "But what I'll really miss is 'yung parang magkakapatid talaga kami, eh."

Did Rico personally share his plans to leave the band, if only with Mark?

Japs finally puts a cork in the topic. "Whatever happened in the past, it's gonna be part of the band's history. Now we're only looking forward to the future. And this new EP is a new chapter for Rivermaya."

Rivermaya's new EP Bagong Liwanag will hit stores nationwide on August 25. This 5-song EP is released on the band's own label, Revolver Music, and licensed to Warner Music Philippines.

HISTORY REPEATS ITSELF. When original frontman Bamboo Mañalac left in 1997, in-band tension and rock politics nudged the band towards near has-beenhood. Rock disciples argued: Bamboo is Rivermaya, and without the "face and voice of the band," Rivermaya would cease to exist. But somehow, the remaining founding members, vocalist Rico and drummer Mark, along with second generation Mayans guitarist Mike and bassist Japs (who took Nathan Azarcon's spot in 2000) somehow survived the onslaught of acoustic, novelty, and birit music that sent their contemporaries either back to the underground or into early semi-retirement. Only Rivermaya (along with Parokya ni Edgar) remained in OPM's mainstream consciousness.

Now ten years later, Rivermaya found themselves in limbo once again. Frontman Rico Blanco has left the band. In the wake of his sudden exit last May, the local music community collectively shook its head—partly in disappointment over Rico's mass-perceived desertion of his band mates who were left to deal with hanging commitments and unsigned contracts, and partly in pity for the remaining band members whom others judged creatively unfit to continue Rivermaya's 14-year-old legacy. As before, spectators argued: Rico Blanco is Rivermaya. Without the so-called "heart and soul of the band," Rivermaya will really cease to exist.

And for a while, even the last remaining original Maya drummer Mark Escueta admitted he thought it would be so. In the band's last out-of-town gig with Rico in Bohol, everything ran in slow motion for Mark, who thought back then, this is it. After their performance, the rest of the band got off the stage to leave but Mark stayed on, desperately imprinting the image of the audience and of his band mates packing up their instruments in his memory.

They were advised many things, including disbandment. But Rivermaya has already established themselves as a group that can, will, and have survived member regeneration. More or less, five members have exited from the group, but every time, those that remained coped with it with more success than, say, Eraserheads. (But that's another story for another article).

Rivermaya will hold auditions for their new lead vocalist on August 24 and 25 (9 am to 5 pm) at the Ishmael Bernal Gallery beside UP Film Center, UP Diliman. The group will choose six finalists and they will hold a reality singing contest on Studio 23 to choose their new vocalist.
Read Next
Read More Stories About
Rivermaya, Rico Blanco, Mark Escueta, Japs Sergio, music
Post a Comment
Featured
Latest Stories
Trending in Summit Media Network