LMFAO releases tour edition of album; will perform in Manila on April 11 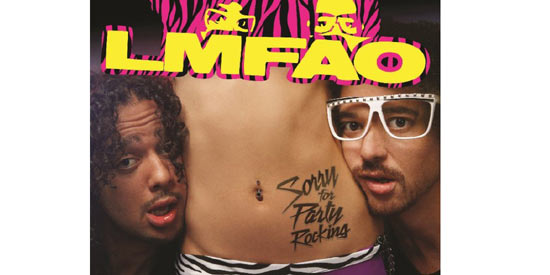 LMFAO, together with the Party Rock Crew, are ready to take their party rock anthems on the road as they conquer Manila on April 11, 2012 at the Smart Araneta Coliseum. But before all that happens, the group comes out with a special tour edition of their album "Sorry For Party Rocking" this month.

The album, which has reached Platinum in the Philippines, has produced two #1 singles, "Party Rock Anthem" and "Sexy and I Know It," while the third single "Sorry For Party Rocking" is climbing the Top 40 radio charts. The Tour Edition features a DVD of music videos of the said hit singles plus "Champagne Showers," "I’m In Miami Trick" and "Shots."

"Sorry for party rocking is a party person’s excuse for having fun," explains Redfoo, LMFAO’s member known for his gravity-defying afro. "It’s the excuse you give when someone complains," he continues. "Let’s say your parents say ‘stop shuffling upstairs you’re waking me up!’ You can now just say ‘Sorry for party rocking, Mom…sorry for having fun.’"

Redfoo’s nephew, Sky Blu, echoes the sentiment, minus the apology. "We rock the party and lead by example," says LMFAO’s lyrical wordsmith.

LMFAO’s "Party Rock Anthem" has surpassed 10 million units in total sales worldwide. "Party Rock Anthem" was the #2 top selling song of 2011 on iTunes in the U.S. behind Adele’s "Rolling In The Deep" and it was the #1 selling song on iTunes in the UK, Canada, New Zealand, Australia, Denmark, Norway, Finland and Sweden. The video has seen over 360 million views on VEVO. LMFAO’s music has been licensed by movie and television shows, including 20th Century Fox’s holiday hit Chipwrecked, Fox’s TV hit Glee and the top charting game "Just Dance 3."

Sorry For Party Rocking Tour Edition is now out in CDs at leading record stores and online via www.MyMusicStore.com.ph under MCA Music.

Get your tickets now at Ticketnet branches or call Tel. No. 911-5555 for the party rock event of the year. LMFAO Live In Manila will take place on April 11, 2012 at 8pm, presented by Dayly Entertainment.