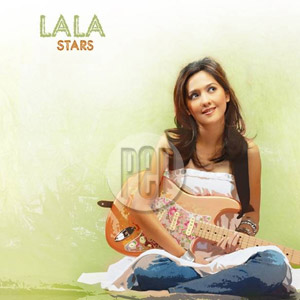 "I want everybody to get to know me through my music," excitedly says Lala of her songs, six of which were penned by the singer herself. "My identity would simply be me, and my compositions are a reflection of my life as a teenage girl—the joys and heartbreaks of love and life."

There is a distinctly mature approach with the unraveling of each track on the record, from the steadily anthemic and self-empowering "Unperfect," which recalls traces of girl-power-pop anthems from the '90s, to the hopeful, bittersweet yearnings of "What About You" which showcases Lala's impressive vocal range and the steady, almost funky vibe and swagger of "Better Alone," which is equal parts optimism and angst, perfect for moments when you're teaching yourself to move on (definitely the perfect battle cry for broken-hearted young ladies everywhere).

By the middle of the CD, Lala gets pensive and explores both her emotions and her uncanny ability to come up with simple yet hypnotic melodies, via the soothing sounds of tracks like "Stars" and the dreamy "It's You," a nice, relaxing ode to an invisible honey, perfect for both road trips with the gals and/or moments spent passing time in your own room, daydreaming about "The One." The album's current single is "Waiting," which was, again, composed by Lala herself with the help of her backup band DJIWA right before the time she began recording.

Lala established herself in the industry by doing a duet with another Warner Music Philippines talent Christian Bautista. Titled "Unsaid," this song was actually written by Lala and was originally submitted as a solo piece.

"Warner had a great idea of me collaborating with Christian, which is a real honor since he is very famous in Indonesia." The ballad is a definite tearjerker, sincerely emotional yet full of hope and promise.

Christian himself has kind words about Lala: "She's very talented, she's perfectionist with her work and she has a great ‘international' sound, she will go places for sure, it's great working with her."

"This has always been my dream," says Lala of the journey of releasing her album, which is currently available in leading record stores nationwide. "I want to be a renowned songwriter and release more albums in the future with original compositions and hopefully have collaborations with other talented musicians. It seems that 2007 is my lucky year. I feel lucky already to have this opportunity. Hopefully this will be a good year to start up my long, fruitful career in music."