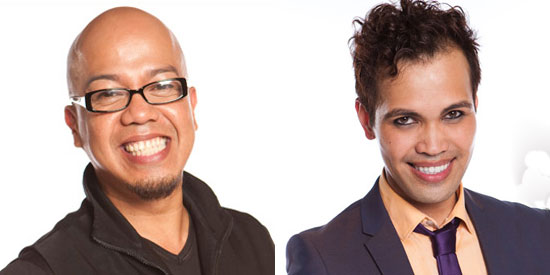 In The Voice Australia, Jerson Trinidad (left) is being coached by British singer Seal while Yshrael Pascual (right) is under the team of Australian singer-songwriter Delta Goodrem.

Two Filipinos have made the cut in the first season of The Voice Australia. Jerson Trinidad and Yshrael Pascual were both born in the Philippines, according to their biographies on the show’s official website.

Jerson qualified for the show when he performed John Legend’s song “Ordinary People.” As a result, he became part of Team Delta.

Meanwhile, Yshrael showcased his singing talents by singing “Miss You” by The Rolling Stones. He is now being coached by Seal.

JERSON TRINIDAD. The 39-year-old singer started out by being part of a band in the Philippines.

When he turned 16, he decided to go solo and perform in Asian countries such South Korea, Thailand, Japan, Malaysia, Indonesia and Singapore.

In 1989, Jerson’s family migrated to Australia where he continued to hone his singing skills.

When he turned 19, he joined Australia’s Star Search and became a finalist. The following year, he joined New Faces and became the champion.


YSHRAEL PASCUAL. Born in Marikina, Yshrael is a 33-year-old carpet cleaner who works for his family's business. This energetic performer was 7 years old when he moved toAustralia with his family.

Yshrael started singing at the age of 19. He became part of the boy band called “4te” (pronounced Forté), which was based in Los Angeles for some time. He parted ways with his band when he decided to pursue his music career in Melbourne, Australia.

In 2004, he won the Music Oz Award for Best R&B talent. Four years later, he was offered a publishing deal with Mushroom Records.


With his penchant for wearing eye liner and preference for pop music, Yshrael was described by website news.com.au as having a “flamboyant style, reminiscent of Adam Lambert on American Idol [Season 8].”