Avenged Sevenfold jams with Filipino fans at the Big Dome 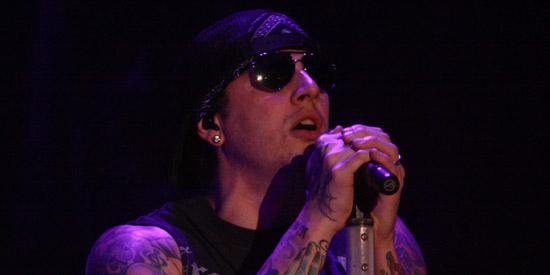 Two young fans had their dreams fulfilled when Avenged Sevenfold vocalist M. Shadows pulled them up to the stage. The popular metal band from Huntington Beach, California was at the Smart Araneta Coliseum last April 26, 2012 for the Asian leg of their tour.


Singing their hit song “Buried Alive,” M. Shadows pulled up a teenage girl from the front row. He gave her the mic and she sang the lyrics from the heart without missing a lyric. She also hugged each member of the band before getting off the stage.

For their next song, Shadows asked the crowd, “Who wants to play bass with us?” He pulled up another teenager, this time a guy. Bassist Johnny Christ handed him the bass guitar and the fan played “So Far Away” with the band.

Pinoy metal superstars Slapshock opened for the band known as A7X for short. Slapshock warmed up the crowd with four of their biggest hits: “Direction,” “Stranded,” and “Cariño Brutal.” They also performed “Ngayon Lang” from their latest album Kinse Kalibre.

A7X for came from 3 cities in Japan (Tokyo, Nagoya and Osaka), Bangkok Thailand before landing here in Manila. They will be at the Hard Rock Hotel in Singapore on the 28th and Kuala Lumpur, Malaysia on the 29th and Jakarta Indonesia on May 1st.

Avenged Sevenfold’s Nightmare album debuted at the top spot of Billboard 200. They’ve sold a total of 4 million albums worldwide. Their current drummer, Arin Ilejay is half-Filipino. Vocalist M. Shadows said during the show, “This is a homecoming for him.” Illejay threw the used drumsticks to the crowd during the encore and after the concert, prompting fans to catch the prized items.

Long time fans Rush Haydee, Chris Wong and Rowick Iglesias thoroughly enjoyed the concert. They’ve seen the band bring fans up the stage but it wasn’t something often done. Haydee said, “I saw them do it on a YouTube video, most of the time they just get one fan from a concert if at all. We’re lucky here in the Philippines they did it to two fans.” Wong added, “The bassist they picked out of the crowd was actually good.” Iglesias said, “I stood [during] the 3-hour concert.” This was no small feat considering Iglesias has an artificial leg and has difficulty standing for long hours. The show was so fantastic he didn’t feel tired.

A7X has had so many hits they weren’t able to play all of them. Wong wanted them to play the slower “Dear God” and “Seize the Day.” Wong said, “Dear God is about leaving a loved one behind and hoping that person’s fine.” Generally the songs are about “being strong and fighting for what you want.”


Avenged Sevenfold performed a total of 12 songs: “Nightmare”, “Critical Acclaim”, “Welcome to the Family”, “Almost Easy”, “After Life”, “Beast and the Harlot”, “A Little Piece of Heaven”, “Bat Country”, “Fiction” and “Unholy Confessions.”