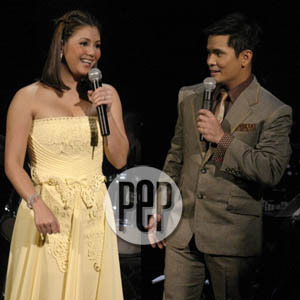 Unable to control his overwhelming emotions, Ogie Alcasid, while in the middle of performing "Kung Mawawala Ka" for Regine Velasquez, was reduced to tears. This happened at Ogie's birthday concert at the Music Museum last August 25.

After a few minutes of choking, the singer-songwriter regained his composure to finish the song, which he turned into a medley together with another popular composition of his, "Huwag Ka Lang Mawawala".

The stirring moment suddenly made everyone realize that perhaps most of Ogie's compositions were inspired by Regine and their love story.

"I think it's the words," Ogie explained when PEP (Philippine Entertainment Portal) sought him out backstage after the show to ask why he became so emotional.

Ogie will be celebrating his birthday this coming Monday, August 27, and according to Ogie, he couldn't ask for more at this point in his life and career.

"Nothing for me," he said, pertaining to any personal birthday wish. "Better health always for me and my parents, of course my children and everybody. Also to the foundations I'm supporting like the House Foundation, Kids for Cancer, and others."

Turning a year older would be extra special, compared to last year: "Well, I'm turning forty, so that's one; and it's the first time after I came out with regards to my relationship with Regine."

We asked him if he invited ex-wife Michelle Van Eimeren and the kids to fly over and watch the concert.

"Yeah, but the kids have school," he replied briefly.

To celebrate his birthday, Ogie had a "Regine-organized" party last Monday before he went to Australia on August 28 to visit his two daughters.

Immediately after the visit, Ogie will get back to work immediately as there are projects lined up—including a movie with Regine for GMA Films—and several shows outside the country.

With everything falling into place, does he still get affected by all the negative comments that he hears, especially those regarding his personal life?

"Yes. Well, who wouldn't be?" he replied. "But each one is entitled to their opinion. I think I'm just being honest to myself but I thank them... I welcome it."