There for Tomorrow, Every Avenue, and William Beckett wow Pinoy fans at the Skydome 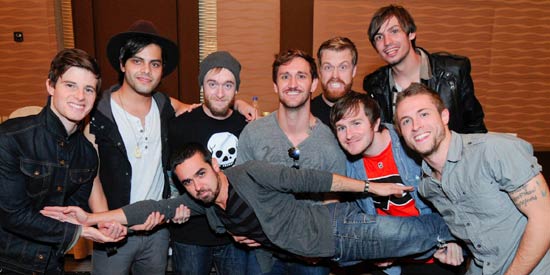 The SM North Skydome recently played host to the aggressive and infectious energy of the international bands that recently played there. That night, the rains couldn't keep away the faithful Filipino fans who have discovered the music of There For Tomorrow, Every Avenue, and William Beckett.

Opening the evening, There For Tomorrow rocked the house with songs culled from their various albums.

As soon as they came out with the song "The Verge," the Filipino fans in the Skydome loudly sang along to their rock alternative tunes.

The band then delivered a solid performance of their single, "Pages," which depicts how life is lived like turning pages in a book, that you can't redo it once it's done.

The four boys: Maika Maile, Jay Enriquez, Christian Climer, and Christopher Kamrada then took their Manila fans on a wild ride with their song "The Joyride." As they prepped for their fourth song, lead vocalist Maika picked up a hot pink bra from the stage floor, which he promptly wore over his shirt for their next number, Deathbed.

As they launched into their fifth song, "Nowhere Boulevard," lead guitarist Christian kept on engaging the crowd by interacting with them during guitar solos, jumping up and down on stage to keep the crowd into their songs.

Lead vocalist Maika who also does their rhythm guitar and programming said that "it feels incredible to be here, we've been dreaming about this!"

He shouts out that their response to their songs is the best they've gotten.

They then dedicated their next song, "Backbone," to a long-time fan in the audience, Juliet. The boys then deliver their take on a love song in their signature technicolor rich punk rock style with "Remember When," a song reminding lovers in a tough spot right now that there were better times before.

The aptly titled and fast-paced "Hunt Hunt Hunt" along with their title single "A Little Faster" rounded out the evening for this Orlando-based quartet.

The boys, who write most of their songs themselves, get down to the honest truth in "Hunt Hunt Hunt" as they sing about a girl who seems to be all good but actually isn't, hence the hunt to get the truth out there. "A Little Faster," first released as their music career was picking up steam back in 2009, could also mean that life was getting faster and more complex and how things change because of it.

Maika says that they are "so grateful for the gracious love and support, that we had an absolutely amazing time, and that we are coming back to one of our favorite countries."

During the performance of There for Tomorrow, it was nice to see the members of Every Avenue and William Beckett taking videos and photos of There For Tomorrow, presumably to share with their Twitter and Facebook followers a behind-the-scenes look of their concert.


After There For Tomorrow showcased their signature alternative rock-punk rock-pop punk sound, they were followed by the band Every Avenue.


This five-man band formed in Michigan is composed of David Ryan Strauchman, Joshua Witenshaw, Jimmie Deeghan, Matt Black and Dennis Wilson. The band Every Avenue came out strong with their pop punk tunes.


They performed songs from their three albums: Shh. Just Go With It, Picture Perfect and Bad Habits. They've been around since 2003 but have hit their biggest success with their 2011 album Bad Habits.

Even so, the Filipino fans who have discovered them are faithful and steadily growing. Girls in the audience kept jumping up and down as the band played, swaying their hands side to side and generally screaming and singing along the whole night through.

Lead vocalist David Ryan says, "it took us a long time to get here, because we never thought we'd be here," to which the crowd simply shouted 'we love you guys!'

They kicked off their 11-song set with a single from the Picture Perfect album, the song "Whatever Happened" then went right on to "For Always, Forever." The latter song is their take on love and how even if it ends, the lovers would always have the best of times and memories, referencing a specific street, Woodward off Charlotte Street.

"The Story Left Untold" from their Picture Perfect album chronicles the end of a relationship and how they can't fix it anymore and with this song, many in the audience sang along wildly and full of emotion.

David Ryan also does piano for the band, although that night he focused simply on delivering on strong vocals. Just before going into their song "Where Were You" from their first album Shh. Just Go With It, David said, "we've been trying to come here for a long time and we're glad to finally be here."


Even though the song is an old one, the loyal fans of Every Avenue could totally relate to the song's message of someone not being there for you when you need them to be.

To show their support and that they were there for Every Avenue, There For Tomorrow band members and William Beckett also took photos and videos of Every Avenue as they performed and it was good to see such companionship among the performers.

Their song "No One But You" from their album Bad Habits had everyone thumping their feet to the strong drum solo followed by an even more powerful guitar solo.

The carrier single "Picture Perfect" had David Ryan exclaiming that it was getting "hot in here!" as they sang about how the picture perfect life isn't all it claims to be and that it's better to do it your way.

The boys then mix things up by going into "Tie Me Down" from their latest album and "Chasing The Night" from their first album, delivering on high energy, electrifying guitar solos and loud vocals that had the crowd enthralled with this unassuming group of five.

Every Avenue ended by singing "There Tonight," "Fall Apart" and "Tell Me I'm A Wreck," with "There Tonight" reminding their listeners that success is nothing without the one you love by your side.

Indeed, this talented band of musicians, who also write many of their own songs, are aware that without their fans by their side, their music wouldn't get the exposure it has had through the years.