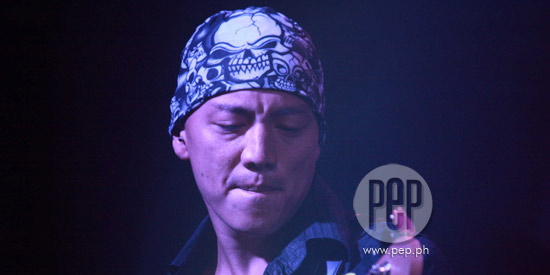 Buwi Meneses (in photo), shared memories about the band's manager, the late Richard Tan, who died on June 3, 2012.

The story is almost like a song from Parokya ni Edgar or even the Eraserheads. Both iconic Pinoy bands have sung about admiring someone that you suddenly lose unexpectedly. The scene during the Azzaro product launch for their latest scent Decibel was certainly similar to the irony filled songs.

Prior to the concert, a fashion show by the Young Designer’s Guild with Jojie Lloren, James Reyes, Ivarluski Aseron and Nancy Reynancia was also held. The atmosphere was alive and festive. Immediately before the band was brought on stage, host Divine Lee and Azzaro brand manager Emily Sia-Koa announced Franco as the local representative for the Decibel scent. International endorsers include Julian Casablancas formerly of the band The Strokes.

Franco rocked the place without missing a beat. They energetically played "Touch the Sky, "Castaway" and Song for the Suspect."


Unbeknownst to most of the crowd, the band was playing through one of the most difficult times of their musical career. What should be a festive mood is tempered by the loss of their manager Richard Tan of Backbeat, who died last June 3. Buwi Meneses was particularly hurt having known Richard for 17 years since Parokya ni Edgar began.


According to TV5's website, Interaksyon, Richard's death was caused by meningitis, an inflammation of the brain and spinal cord. Richard is the manager of bands such as Parokya ni Edgar, Kamikazee, Gloc-9, Franco, Moonstar 88, Typecast, Hilera, The Youth and Chicosci.

In an interview with PEP.ph after their set, Buwi said that initially just performing for the launch was reward enough, “Honestly we were hoping we could get that set and even endorse it. When the host announced that Franco would represent the image, the whole band was happy. Hopefully we get a good response for this partnership.”

The evening could be considered a bittersweet situation for the Franco band. On one hand, Buwi was happy to get the endorsement deal but he was also grieving for the loss of Richard Tan, especially since he had a special way of negotiating and handling deals for the band.


Buwi recalled, “May mga deskarte si Richard na only he could do. It’s hard for the bands to face the concert producers so he’d negotiate for us and other plans. We have tie-ups with different companies and even abroad. What if there are new ones that have not been negotiated? And the new generation too, who’s going to do that? Who has that magic touch that Richard has?”

According to Buwi and Gabby Alipe, Richard was more than just a manager. He was a good friend and father figure to all the bands that he managed.


Buwi then revealed that some rock bands that are planning a reunion, “As of now I counted 7 not including the old ones. There’s this talk of the reunion of Teeth, reunion of other old bands din. This is the new generation Typecast, Hilera, Kamikazee, Moonstar, Parokya, Franco and Chicosci.”

Parokya ni Edgar and Kamikazee were both on the road for the Tanduay First Five concert series when they found out about Tan’s death. “We were doing our Tanduay tour to Vigan and La Union. We knew already he was hospitalized before leaving. He loves food, we all love food. Tapos na mild stroke na siya before around 2 years ago. On the way home we got that text. We couldn’t sleep already. Everyone was grieving already.”

The timing was hard on Buwi, “This was actually a day before my birthday last June 3 at 4:15 in the morning. Then it didn’t really sink in with us, what to expect. Everyone’s still in shock it will take a week for his wake. Somehow we were talking about what we should talk about ‘what if..’. We should give it time. Most of the industry is really supportive and are worried.”

This was not the first time Parokya had to deal with a loss of a family member. In 2000, Buwi’s mom died from breast cancer. This isn’t the first time where he has had to perform while grieving, “We’ve been friends since prep, grade school, high school and college. We’ve had a lot of experiences like the loss of my mom first. So we were tested already in that part. How we could still gig, how we could be so attached to each other and play in front of people who are there to have fun.”

When he was asked if music and friends are therapy for them, he said, “Definitely, definitely if that ends you’re really not friends. Your friends are there to support you all the way through the good times and the bad times.”