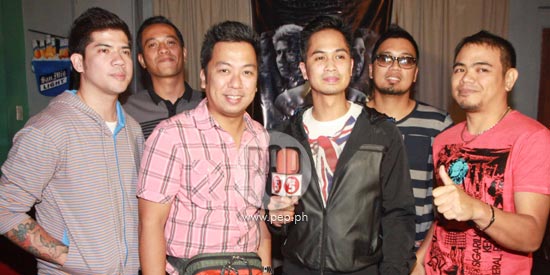 This time their latest album is loaded with hits like “Basta Ako,” title track “Good By Sunday” and even a track written by Raimund Marasigan titled “Bola.” The music video for the track “Basta Ako” was directed by Joyce Bernal and features Fil-Korean Jinri Park (who is popular as an FHM babe). Some of the songs are reflective of the bands experiences including the departure of long time vocalist Ney Dimaculangan.

The new album has 11 original songs plus a special track of their Suzuki jingle titled “Astig.”

Marc Abaya has been with the band Kjwan for several years now and has a more active acting career in GMA-7. He is also part of the 2012 Cinemalaya New Breed film Ang Nawawala by Marie Jamora.


Raimund’s current band Sandwich is now in the United States for a concert with Apl D’Ap featuring the hottest Pinoy acts.

Darwin Hernandez is not only the brother of guitarist Herbert but is part of Soupstar management that handles the band. He was one of the people that originally conceived 6CycleMind. Darwin was the 6th member added to the original 5 band mates that formed it hence the name.