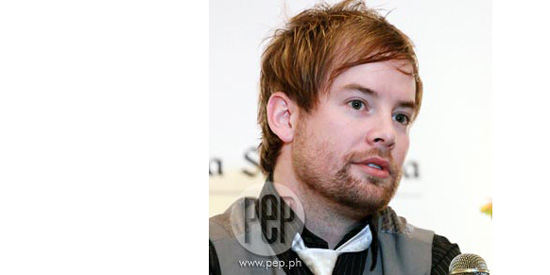 American Idol Season 7 winner David Cook will perform on July 14, 2012 at the Smart Araneta Coliseum and on July 15 at the Cebu Waterfront Hotel. This photo was taken during Cook's visit to the Philippines in 2009.

David Cook has been one of the most successful American Idol winners to date. He has toured extensively in the United States and most parts of Europe, Middle East and Asia. In 2009, Cook performed in Manila together with runner up David Archuleta at the Mall of Asia Concert Grounds to promote his self titled album David Cook.

No one can ever forget this underdog as his fans watched him struggle and won over not only the judges but his fellow Americans for the coveted title of American Idol grand champion. Starting out relatively unknown with a few surprises here and there during the Hollywood Week, he caught the attention of everyone when he did Chris Cornell’s version of Michael Jackson’s “Billie Jean” during the Year of Birth Week of American Idol Season 7.

After that his next performance was eagerly anticipated by patrons of the show, waiting if he would be able to sustain the momentum he gained after that performance. And he did. During the Mariah Carey Week, he gave his own rendition of the classic pop hit “Always Be My Baby” that probably ensured his eventual win. The then hard-to-please judge, Simon Cowell gave his thumbs up for that performance by stating “It was like coming out of karaoke hell into a breath of fresh air.”

David Cook’s championship song “Time of My Life” sold over 1 million copies and has been dubbed as the best selling champion song to date.

Dayly Entertainment in cooperation with LAMC Productions and Rockstar Touring will bring the enigmatic Grand Champion back in Manila and in Cebu for the first time. David Cook Live in Manila will take place on July 14, 2012 at the Smart Araneta Coliseum and Live in Cebu on July 15, 2012 at the Cebu Waterfront Hotel.