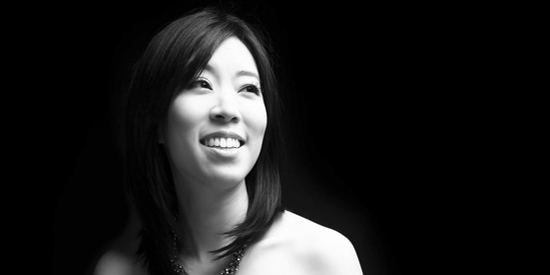 Singapore-born Corrinne May is a singer-songwriter based in Los Angeles since 1999.

She is currently back in Singapore to promote her fifth and latest album titled Crooked Lines. During this time, she was also invited to perform at the opening of Singapore's Gardens by the Bay, specifically the Bay South Garden. Performing on the second night in the Lion City's horticulture oasis and newest attraction, she was also able to sing with international sensation Jason Mraz on the first night.

"It was fun to sing a duet with him, even if it was just one song!"

Through an exclusive phone interview arranged by Warner Music Philippines and Warner Music Singapore, pep.ph was able to get to know a little bit more about the singer.

Her music caters to lovers of adult, contemporary pop. Reminiscent of the sound of Joni Mitchell, Sarah McLachlan and Carole King, she is also a singer-songwriter like them "and with this latest record, I have a couple of songs on the guitar as well." Previously, her albums featured her playing the piano.

She says that her music can be enjoyed by everyone, so "you could listen with the entire family, nothing too crazy about the songs, not like you have to cover your ears..." She has a lot of fans who are kids so she likes to keep the songs rated PG.

She describes her music as "honest, and what I go through in life."

Her previous five albums have been released in Asia and the United States, with the best performance sales-wise in her native Singapore. In the United States, she is more of an indie songwriter working with an independent record label, "doing what I can to tour and market it."

Corrinne writes most of her own songs except in cases where she collaborates with other artists. One of her favorite collaborations is with Carole Bayer Sager. "I've admired her since I was a kid. She wrote That's What Friends are For and even The Prayer. She's pretty amazing."

The song they worked together on is called If You Didn't Love Me along with Carole King herself. This song appears on her first album entitled simply Corrinne May. They collaborate again for Everything In Its Time which was released on her second album Safe In A Crazy World.

Corrinne draws inspiration for her songwriting from "what I'm going through in life, difficult or challenging. The first few months of motherhood was really quite tough, having to adjust to being a new mom."

Like any other mom, she worried about milk supply, too! She goes a little deeper with "challenges that cause you to question your faith, my faith journey, my daily life, those lend themselves into songs and sometimes what I hear from other people overcoming difficulties because they inspire me to look into my own life."

Considering how much music has been a part of her life since she first released an album in 2001, what made her decide to come back after the four-year break from her last album Beautiful Seed.

"It's hard not to write a song when you have the time to think about your life and to express a sudden joy. If I didn't do music, I would be so sad," she exclaims with a laugh in her voice.

"It's a natural outpouring of my person and I just have to do it." She can't imagine life without the opportunity to work on another album again.

We ask her to name her five favorite tracks on her latest album Crooked Lines. The title of the album was drawn from the experience of watching her daughter drawing with crayons one afternoon and explaining that the drawing represented a butterfly. The image looked just like crooked lines and Corrinne relates that is how life is sometimes, how the journey is never one straight line.

When I Close My Eyes, the seventh track, is one of her favorites, and "inspired by my daughter's iPad application." In this app, the little girl has the option to do whatever she wants to do if she just closes her eyes. Corrinne connects this idea to John Lennon's famous song Imagine. "I like that song, when someday, I imagine, there wouldn't be abortion. Hopefully one day, all little babies will be kept protected in their first homes in their mother's wombs."

The song also features a gospel choir in the background and the inclusion of an Irish penny whistle, or feadog. This is performed by Eric Rigler whose whistle-playing talent can also be heard on Hollywood blockbuster movies such as Titanic, Million Dollar Baby, Braveheart and more, including the Koreanovela Jewel in the Palace. "He's a really special guy who came in and recorded that for us."

"I really like Just What I Was Looking For, a guitar song where I pick up the guitar and I just play and feel good about it." This is the ninth track and makes her feel like "as much of a rocker as I can, since I'm not much of a rocker!" she explains.

The song Beautiful Life also makes it to her favorites on this latest album. "At the end of it all, it's how we live our lives and how we take the attitude of viewing it as a negative or a positive thing."

Like many other people, this singer says she is a "last minute person," so the song 24 Hours really strikes a chord in her. "It reminds me to take each moment seriously and to treasure every moment."

Rounding out her top five is You Believed, but she says, "like a kid, I cycle though all the songs, and I love them all and during certain times, some of the songs speak more than the others."

Her album Crooked Lines was released in the Philippines last May 2012 and we ask her if she is planning to come to the Philippines. "I would love to, whenever I can!" she enthuses. As of now, no definite dates have been given as to when she will be here.

She has heard of Filipino singers though, and without missing a beat she says, "Lea Salonga," when asked to name who she has heard. "The latest I've heard about is Charice."

She also shared an experience of visiting a Filipino supermarket near her place in Los Angeles called Island Pacific. "They always play very nice music from Filipino singers and I think the music that people love in the Philippines, a lot of them sound like ballads: huge choruses and romantic sounds.

"I personally love big ballads since I grew up listening to them and I share that sentiment."

Since the birth of her daughter Claire nearly three years ago, has her music changed or has it been influenced by this milestone? "My music has become more childlike in the way I see things because she taught me to look at the world a little differently."

The toddler is in her 'why mama' stage and Corrinne finds herself explaining even the most mundane things, and this leads to "questioning even the simplest things, and are certain things supposed to be that way, can't we change it for the better, that sort of thing."

Her daughter gives her a more questioning and childlike wonder of how the world is. "It makes me want to be a better person because of her."

Because of childbirth, Corrinne also finds herself able to relate better to the idea of love being intertwined with sacrifice.

Has it been easy living in Los Angeles for the past 13 years?

"These past few years taking care of Claire would have been easier with an extended family." The opportunity to bond with family and friends is one thing she misses since back in Los Angeles, since it's just her husband and Claire in the house.

What keeps her in Los Angeles are the good friends and the creative influence on her music. "We learn from our fellow musicians all the time, just new things we can do with music. In terms of the creative lifestyle, LA is wonderful. But family and friends and being there for important events, that is what miss from Singapore."

In her own words, we ask Corrinne May to share why the Filipino listener should pick up a copy of her album Crooked Lines released under Warner Music Philippines.

She humbly says, "I think they would love the music. It would cheer them up when they are having a dreary day and will give them something to think about and reflect on. It's all around, feel-good music that I'm very proud of."