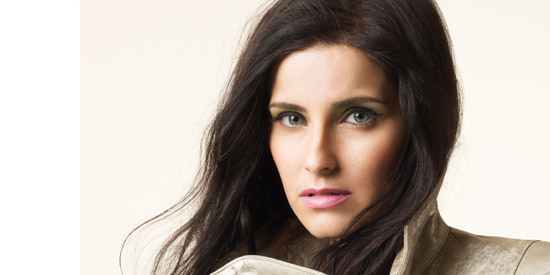 Canadian singer-songwriter Nelly Furtado is behind the hits "I'm Like a Bird" and "Say It Right."

Grammy Award-winning singer-songwriter Nelly Furtado and rap rock band Gym Class Heroes are set to perform in Manila for the first time on August 16, 2012 at the Smart Araneta Coliseum.

Canadian singer-songwriter Nelly Furtado burst into the music scene in 2001 with her debut album Whoa, Nelly. The first single “I’m Like A Bird” won a Juno Award for Single of the Year and earned Furtado her first Grammy Award in 2002 for Best Female Pop Vocal Performance. Her second album Folklore, released in 2003, included the hit singles “Powerless (Say What You Want),” “Try,” and “Forca,” which was used as theme song for the 2004 European Football Championship. For her third album Loose, she worked with Timbaland and they experimented with different sounds including R&B and hip hop. The album produced the chart-topping hits “Promiscuous,” “Maneater,” “All Good Things (Come to an End)” and “Say It Right,” Furtado’s most successful song worldwide. Loose is her most successful album to date, which sold over 10 million copies worldwide and certified multi-platinum in several countries.

In between working on her own music, Furtado collaborated with other musicians. She was featured along with Justin Timberlake on Timbaland’s single “Give It to Me,” and worked with James Morrison on the song “Broken Strings.” The song appeared on Morrison’s second album Songs for You, Truths for Me. She also been featured on songs with Juanes, Flo Rida, Tiesto, N.E.R.D. and K’naan.

In 2009, Furtado also released Mi Plan, a full Spanish-language album. The lead single “Manos al Aire” was a hit and reached number one on the U.S. Latin Billboard chart. Furtado won a Latin Grammy for Best Pop Vocal Album in 2010.

Furtado is set to release her fourth English-language album The Spirit Indestructible in September. "I began writing these songs around the time I released my Spanish album Mi Plan," she says. "I was in a great headspace, feeling refreshed and ready to really deliver in English again. This album is all about positivity, youth, good energy, and the relentlessness of the spirit. I want people to live this music the way we did when we wrote it. I want them to jump, dance, scream, laugh, cry, love, and vibe to it, and to turn it up very loud everywhere." The first song from the album “Big Hoops (The Bigger the Better)” was released last May, and just recently, the full music video for the title track “The Spirit Indestructible.”

Gym Class Heroes is a rap rock band from New York, USA, formed in 1997 when rapper Travie McCoy met drummer Matt McGinley during their high school gym class. Guitarist Disashi Lumumba-Kasongo and bassist Eric Roberts joined the group in 2003, then the band was signed to Fueled by Ramen and Decaydance Records.

In 2005, Gym Class Heroes released their debut The Papercut Chronicles, a classic coming-of-age album that spawned the platinum, record-setting Top 40 No.1 single “Cupid’s Chokehold/Breakfast in America” and led to the first of the band’s multiple outings on The Warped Tour. Papercut served up a fresh, new palette for hip-hop: live instruments, slyly humorous lyrics, and eerie melodies that illuminated rapper McCoy’s dark, personal subject matter.


Since then, Gym Class Heroes has established themselves as one of the most exciting bands in pop music, topping the radio charts with hit singles, touring the world, making countless national television appearances, and winning multiple music awards, including the MTV VMA for Best New Artist in 2007 (beating out the likes of Amy Winehouse and Carrie Underwood).

Their follow-up album As Cruel As School Children released in 2006 produced the hit singles “Cupid’s Chokehold” and “Clothes Off!!” (both featuring Patrick Stump of Fall Out Boy). Their third album The Quilt, released in 2008 featured collaborations with other artists. Estelle, on the song “Guilty As Charged”, Busta Rhymes on the song “Peace Sign/Index Down,” Patricj Stump on “Blinded by the Sun,” The Dream on “Cookie Jar,” and Daryl Hall of Hall & Oates on “Live Forever (Fly With Me).

On their latest album The Papercut Chronicles II, the band collaborated with Adam Levine of Maroon 5 on the chart-topping hit “Stereo Hearts.” Other collaborations are with Neon Hitch on the song “Ass Back Home,” and Oh Land on “Life Goes On.” They are currently promoting “The Fighter,” which features Ryan Tedder of OneRepublic.

Overall, The Papercut Chronicles II is a welcome return for Gym Class Heroes who have been encouraged by the message they’ve received from their fans so far. “Our fans are our biggest inspiration,” McCoy says. “I remember going to my first Fall Out Boy show and seeing every kid in the crowd singing the lyrics back to the band. That was the first time I’d experienced band-fan interaction that intense. So to actually have that now is the best thing in the world. When we’re in the studio, we have them in mind. When I’m writing, I’m thinking about how cool the song is going to sound when thousands of kids are screaming it. Our fans definitely push us to be better everyday.”


Adds McGinley: “It helps us put into perspective why we make music. It’s not always to have enormous success. A lot of times it’s just for people who come up and tell you that they really dig your music.”