Joey Generoso of Side A releases solo album; will have Zia Quizon as guest in his August 15 concert 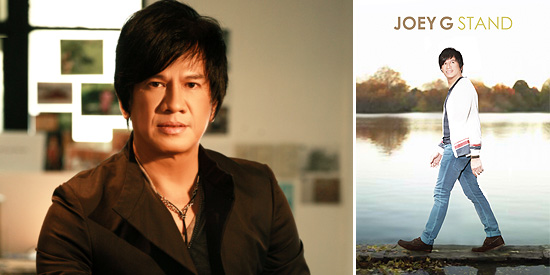 Joey Generoso's first solo album, Stand, has 9 original tracks including one penned by Grammy-award winning songwriter, Dianne Warren. He is also set to have his solo concert on August 15, 2012 at the Music Museum with guests Joey Benin and Zia Quizon.

He is known as the voice of Side A.

But after 23 years of being the band’s frontman, Joey Generoso has decided to take a brave step forward.

No, Side A is not breaking up and he is not leaving the band. But Joey G. is releasing a solo album under Warner Music Philippines titled, Joey G. Stand.

The title of the album, which is also the title of its carrier single, holds a special meaning for Joey.

While a lot of us would surmise that his bandmates would be opposed to the idea of him going solo, Joey pointed out that they are very supportive.

“They’re all excited and very supportive, you know.

“And one song came from our bassist, yung Ned Esguerra…and ganda rin nung ginawa niya. It’s entitled ‘For You.’

His special guests are his former Side A bandmate Joey Benin, and Zia Quizon, daughter of the late Dolphy and Zsa Zsa Padilla.

Joey believes that one of the reasons why their band has lasted this long is because of the freedom they give to each other, especially in terms of their individual growth as artists.

The late Wyngard Tracy was the band’s former manager. Joey said that Wyngard encouraged him to pursue a solo career apart from his stint as the vocalist of Side A.

At a press launch held last August 13 at Alphonse Bistro, City Golf, Ortigas, Joey told PEP.ph and other members of the press what makes this album special.

One of the tracks in the album stands out because it was penned by a Grammy-award winning songwriter.

According to Joey, “May isang song na gusto ko dun, yung ‘I’ll Be’… the song was composed by Diane Warren.

“Siya yung nagcompose ng ‘I Don’t Want To Miss a Thing’ saka ‘Love Will Lead You Back.’

Another thing that sets this album apart, Joey says, is the people he worked with.

“Ang nag-arrange ay si Bobby Velasco na, I can say, is one of my favorite arrangers dito sa Philippines.

“So yun pa lang, yung formula niya mag-iiba yun. But still, my voice will be there. Pero iba yung flavor. So yun yung talagang tingin kong iba,” he pointed out.

INSPIRATION. Joey is inspired by his fans who have supported him throughout the years.

“Inspired ako to do this album para sa kanila lahat. Kasi through the years they’ve been supporting me and sa mga gigs, they’re always there.