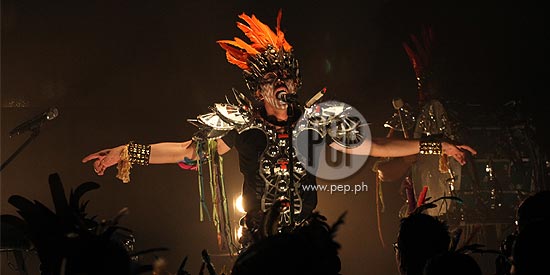 “I’ve wanted my own studio since I was a kid, and now I have it in my attic. So it’s like me again in third year high school, when my classmate lent me his double cassette player and keyboard, and I could record stuff at home!” says Rico Blanco.

Now that Rico Blanco is back in the recording scene, he promises a totally different sound in his new album Galactik Fiestamatik.


After his performance, Warner Music Philippines’ general manager Flerry de Leon and sales and marketing manager Nico Bacani handed him a citation recognizing Rico as the first OPM artist to have an album at #1 (for 9 consecutive days) on iTunes Philippines. He was also presented with an award for his first solo album Your Universe turning five times platinum, with over 80,000 units sold.


This year marks the return of Rico to the recording scene after the 2008 release of his solo album Your Universe.


The year 2012 is also memorable for Rico since he was able to fulfill his dream of having a home studio.

“I’ve wanted my own studio since I was a kid, and now I have it in my attic. So it’s like me again in third year high school, when my classmate lent me his double cassette player and keyboard, and I could record stuff at home!”

For this album, Rico takes the sounds he grew up with—the thundering ethnic beats of Ati-Atihan, analog synths of New Wave, and even the catchy groove of contemporary pop—and mixes it up all in his head in a tribal punk rave.

Rico Blanco’s 9-track album offers a festive vibe that is uniquely his.

The madcap journey begins with “Amats,” the creepy yet intriguing carrier single that has been described by fans as a “stalker anthem.”

Rico says about this song, “I wanted it to be in your face, like a stalker you want to get rid of.”

He continues, “It’s always the first song that I create [for an album] that takes me where I want to go; that’s what happened with 'Yugto,' I just took bits and pieces of it and turned them into other songs. This time, it was “Amats.””

Other songs include “Burado” (With lyrics that go: Wala na sa USB / wala sa phone book / inbox at sent items) and the folksy “Lipat-Bahay,” which captures the nostalgia of moving house and letting go. These songs were performed on the piano and accompanied by snare drum for a more earnest, acoustic sound.

During the album launch, Rico narrated the story behind the song “Lipat Bahay.”

“My family’s from Laguna, so to be closer to work, I live in the city. I had been condo living for the last ten years, but last year, I moved to a new place so I could have a dog, an affectionate Dutch Shepherd named Bowie.

“The minute he said that, I was so inspired, I was already writing the song in my head while pretending to listen to him—sorry Dong! I’m thankful for [advice from] friends I respect; they have no idea how much confidence I get from the little things they say.

As the night continued, Rico also recalled how he came up with the song “When the Wheels Turn.”


“The Warner A&R dropped by and wanted to see my progress, but with this song, I only had the music 'cause I junked the previous lyrics and was about to ditch the song entirely. But I told him I’d give it another shot, and the minute he left, I pressed the record button and just made up the first line as I was singing into the mic. ‘I’m waiting in the corner of the sun.’

“I didn’t know where the song was gonna go, but I did the same thing for the second line, then the third line, the chorus, and then the rest of the verses. This is the first time I’ve ever had the exact moments of lyric and melody creation actually recorded.

“It was as stream of consciousness as I could get, and I love it now, because it felt like someone [else] wrote it, and I’m trying to figure out what he said, because I wasn't that person that day!

Just like any other public figure, the singer-songwriter has been a victim of rumors. This prompted Rico to write the song “Chismis.”

The new album also includes songs for those coping with heartbreak. Rico offers a post break up song titled “Hours and Days.” One can just imagine someong listening to this song while reliving the pain of breaking up with someone you love.

PASSION FOR DANCING. Rico marked another milestone in his career by doing a techno-influenced song titled “Sayaw.”

“It’s not a joke; it’s as serious as my songs can get. Dancing is one of my greatest loves," revealed Rico. "I’ve never really written a song I could dance to; and the message of the song is just about not caring, not giving a fuck about what people will say.”

Indeed, the singer loves to dance and he enjoys every part of it. Rico considers dancing an outlet to break free from all the stress in life.

“It’s about forgetting your problems, leaving school or the work week behind, and enjoying the night. We work so hard as human beings, trying to be the best we can be, so we deserve…to dance!”

The album closes with “Ngayon,” a song that celebrates the here and now. Rico believes this song can be compared to Pinoys' penchant for taking snapshots.

For this new album, Rico purposely challenged every aspect of the way things are traditionally done in the studio.

“If there’s anything that ties it [the songs] together, it’s the goal I had in terms of the process,” says the former vocalist of Rivermaya.

He added, “Although they were lying around, I didn’t use any of the instruments that I, or most bands, would ordinarily and automatically use in recordings.”

MUSICAL INFLUENCES. During the September 5 album launch, an AVP was shown wherein Rico shared the inspiration behind his Galactik Fiestamatik album.


“When I was starting out, my influences were artists, like the Beatles, XTC… but now, I’m inspired by producers, sound designers and engineers, like how songs or movies sound. My influences can be experiences, like fiestas, or a story, like how Dong Abay talked to me [inspiring “Lipat-Bahay”].

“At this point, the biggest influence is from the sounds that I hear, the experimentation that happened here. I was inspired by my new place. I also went to a couple of festivals last year in Spain and in Corsica, and it gave me the confidence to do what I love, and not care about what people are into now.

“It’s something I’ve always known, but it’s good to be reminded of that every so often. It totally freed me from thinking in genres or music direction.”

Galactik Fiestamatik is now available for download on iTunes worldwide. It is also available in retail outlets of Odyssey, Astro Plus and SM Record Bars.