Marco Sison returns to the recording scene with his 8-track album, Isang Pagkakataon 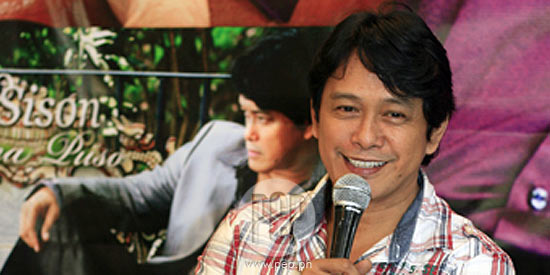 Marco Sison, the voice behind classic '90s hits such as "Make Believe," "My Love Will See You Through" and "Si Aida Si Lorna O Si Fe," comes back to the music scene with his new album Isang Pagkakataon.


Isang Pagkakataon features eight new compositions that should make worthy additions to Original Pinoy Music (OPM). Marco's last album was released eight years ago, although he's only been absent from the music scene about three years.


He quietly settled into a quiet life and business in Laguna, so what brought him back? Some media people quip that he must have plans to enter politics, to which he quickly responds, "hindi ako tatakbo, marami na doon."


His simple reason then? "I just want a new album, hopefully magkaroon ako ng mga hits, ulit." Isang Pagkakataon is released under Polyeast Records, his first with the recording company. It is executive produced by Marco himself and produced by Vehnee Saturno, composer and long-time collaborator of Marco.


The challenge in making an album now is not about coming back but as Marco points out: "to make another hit! Parang, sali naman ako diyan, matagal na kasi," he ends up joking. He has been asked numerous times when the next album would be, so Isang Pagkakataon is his answer.


Potential hits according to Marco include the carrier single "Isang Pagkakataon" and the only song he composed on the album, "Sabik Na Puso." He smiles enigmatically when asked: "sino nagpapasabik ng puso mo ngayon?" A member of the press jokingly injects Marco's famous song: Si Aida Si Lorna O Si Fe as the answer.


It is his generation of classic balladeers who have indeed left their mark on OPM, the likes of Rico Puno, Noynoy Zuniga, Rey Valera. The four of them make up the group known as Hitmakers and they have been having successful shows here and abroad, especially in the United States.


Marco says he is in a phase of his life that is "exciting, panibagong adventure, risk, panibagong project, pero exciting to do something new. Nakakatuwa."


For those who have fallen in love with Marco's smooth, silky voice from his days on GMA-7's Student Canteen, Isang Pagkakataon offers original compositions sure to attract a new audience for the balladeer.