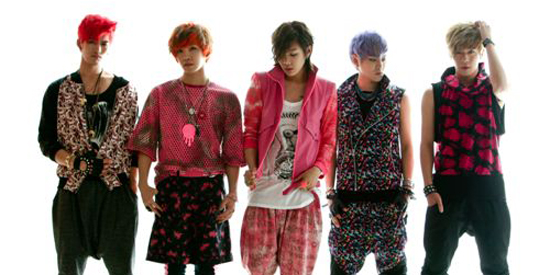 South Korean boy band F.Cuz (pronounced as Focus) is currently in the Philippines to promote their latest album titled For Century Ultimate Zest. They are expected to be in the country until January 8, 2013.

PEP.ph and other members of the press had the chance to interview F.Cuz last December 28 at the Korean Cultural Center in Taguig City. The Korean boy band maembers expressed their gratitude for the warm welcome given to them by their Filipino fans.


According to the boys, this is their first time to visit the country and that they like the weather in the country. Given the chance, they would want to come back to the Philippines to visit Palawan, Bohol, Cebu and Boracay for a vacation.

The Kpop group is also open to the idea of collaborating with Filipino artists in the future. They are also willing to release a Filipino album or single, given a chance. The boys would like to promote Kpop in different countries around the world.

To date, F.Cuz has released three extended play albums including No One (2010), Gorgeous (2010) and their comeback album For Century Ultimate Zest, which was released on April 27, 2012. Aside from their Korean albums, the group has also released different versions of their singles in Japan, Taiwan and in the Philippines.

Catch them live at the 4th Philippine Kpop Convention on December 29 at the PICC Forums 1, 2 and 3.

The 5-member boy band will also conduct a series of malls shows and fan meeting events on the following dates: