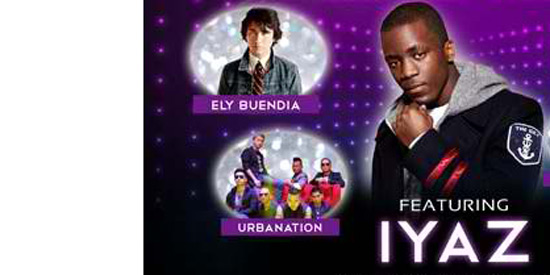 
Although Iyaz is known for his collaboration with pop sensation Charice for the hit single "Pyramid," the rapper has certainly established his own name in the music scene with his songs "Replay," "Solo," and "Pretty Girls."


In his Twitter account, Iyaz posted two days after his arrival in the tropical country: “I’m in Manila, who wants to take me for lunch? Haha, my treat!!”


During his Manila press conference, Iyaz expressed his happiness to be given the chance to return to the Philippines: "I'm having just as much fun. I didn't get to go out much the last time, but this time I went out. People of the Philippines definitely know how to party...we popped bottles and had champagne and had fun with it," he said in a recent interview with members of the Filipino media.


He's going with the flow, "we never really plan, we just get up and say, everybody go and let's go out."


During this trip, he has sampled several variations on seafood and even sisig, of which he jokingly remarked, "I'm kinda skeptical of what I've eaten, but so far, so good."


Iyaz is the only foreign artist to be featured in a New Year countdown in the country for 2013. He is joined by local groups like Up Dharma Down, Urbanation, General Luna, and artists like Ely Buendia and Mark Mabasa.


Another notable feature of the countdown is the Dazzling Star Drop at the stroke of midnight, the second year in a row for Eastwood City and inspired by the New York Times Square Ball Drop.


It didn't take much for Iyaz to say yes to this event, because he says, "you [Filipinos] guys convinced me, when I was here the last time, you asked me to come back for a New Year event, and when I was told about this, I was, let's do it! I had so much fun the first time around, so I couldn't say no."


"I'm not even worried because I've been here before, and you guys know how to party," referencing the enthusiastic response he got back then.


HE CONSIDERS CHARICE AS HIS LITTLE SISTER. His belief as a performer is that, "if they are confident in their art, their craft, I don't judge, how you carry yourself in your craft and performance, just go out and have fun with it," serving as reminders for him as well whenever he goes on stage or when watching others perform.


When asked if he is willing to collaborate again with Charice, Iyaz mentioned that he is open to the idea since he had a great experience working with her in the past.


"When we finally met, we just clicked. She’s like my little sister."

STARTING OUT AS A RAPPER. Iyaz, whose real name is Keidran Jones, was born in the U.S. Virgin Islands but raised in the British Virgin Islands.


He recalls that in his hometown: "The music scene in the islands, where I'm from, we got a lot of rappers, everybody's rapping, not much of singing. I have boys from my village who are rapping too and when I get the chance, I help them as far as I can help." He explains that he gives advice, especially when it comes to the songwriting or performing, both of which Iyaz has learned to excel at.


That's why his opinion on rappers not really making it as big winners on song competitions is, "the artists, the rappers, they still get exposure and create a fan base on the show, so whether you win or not, if you've created a big enough buzz and fan base, you can go out and use that to your advantage. It's up to you now to take what the show brought to you and apply it to what you do."


Hard work and pursuing your passion are big on his list of winning traits.


He has ventured on other projects outside the music scene like his role on Hannah Montana. He recalls telling producers to "give me the smallest role possible, because I wasn't sure that's what I wanted to do." He ended up enjoying that, and he says, "I'm definitely open to other acting roles."


His TV show preferences might shock or surprise some as he revealed that he is a big fan of Disney Channel, watching shows like Hannah Montana, Phineas and Ferb, and Wizards of Waverly Place. He even cites Princess Protection Diaries but asks the public: "don't judge me, I like that movie," he laughs at his own admission.


He explains that the reason is because "when you watch the news it's all about this person died and something bad happened here...and I don't want to surround myself with all that negative stuff, I just want to chill when I watch."


His not-so-secret crush apparently is a Disney-channel girl who appeared in Camp Rock. He gushes about Demi Lovato, "I love her, I might marry her! Who knows, whichever one comes first. Working with Demi was definitely cool, she has amazing vocal range. I don't even understand how, when you look at her, whoa, how that voice comes out. Working with Demi was definitely a great experience. I used to watch her on TV then all of a sudden we're doing a song together. It's weird that you go from watching her on TV and then you go in the door and doing a song with her. Fun, great times."


This songwriter-rapper looks up to an eclectic mix of music legends and stars including Michael Jackson, Bob Marley, Li'l Wayne, and Jay-Z. Had Michael Jackson still lived, Iyaz would consider it a dream to collaborate with him. Now, he hopes to work on a project with Elton John even though Iyaz admits, "this might sound weird," and Beyonce, "she can dance, she can do that in the video and I'm gonna do the rest."