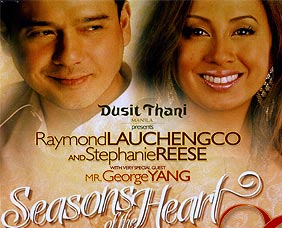 Celebrate love with Seasons of the Heart—an elegant, musical evening filled with swinging standards, well-loved songs from musical theater, and classical favorites from Fil-Am ambassadress of song Stephanie Reese and balladeer Raymond Lauchengco. This concert will take place on February 12 at the Grand Ballroom of the Dusit Thani Hotel Manila.

February is considered to be the month of love and concerts here in the Philippines.

“You can choose the kind of show you want. It’s just an honor to be a part of that choice.”

And as part of the concert goer’s choice, Raymond Launchengco together with International performer Stephanie Reese offers an elegant evening of timeless music.

SEASONS OF THE HEART. The balladeer explained, “It’s very special, it is called Seasons of the Heart back-to-back with myself and Stephanie Reese the Fil-Am ambassadress of song and her special guest is tycoon and tenor Mr. George Yang.

Raymond added, “This is a very, very elegant concert.

“We will be singing timeless songs, I am not saying old songs, and there are also new songs that are timeless.

“I am talking about the kind of ambiance, the kind of musical atmosphere that evokes old-fashioned romance.

“It’s a kind of concert that you’ll have overflowing glass of wine, candlelight five-star dinner and you listen to the best love songs.

“Love is different nowadays, with twitter and Facebook you can get engaged or you can break up with somebody by just clicking a mouse.

Looks like Mr. Balladeer wants to bring back old-fashioned romance to our modern world.

“The interesting thing about the show is that since it’s basically a back-to-back thing,” said Raymond when asked to differntiate their concert from other events this February.

“Steph and I both felt that it should really be back to back. You know I’ve seen concerts with two artists, sing ten songs each and they open with a duet, close with a duet and that’s it!

“We wanted it to be 80% duets really back-to-back so to speak and just a few spot numbers.

Stephanie added, “I also think that in the light of Valentine's, people just do their own thing.

“But we really wanted to make people feel nostalgic about love and celebratory in that sense as well...and to feel like a guy and girl up there singing love songs and duets.

How did they bring together these three performers?

Tenor and tycoon Mr. George Yang, who will be a special guest during the Seasons of the Heart concert, answered, “Actually I am just a guest here, and the two of them are the real features.

He jokingly added, “I was forced by Teresa Kong [producer of Seasons of the Heart].

“Normally I only sing as a guest because I don’t want to practice so much.

“I don’t want to take the main responsibility but it came about because Teresa [Kong] talked to me and it sounded fun so I said, okay.

“I have worked with Stephanie before, it was fun.

He explained, “Because me, I just want to sing for fun but there’s pressure because people are paying good money. It should be okay.”

For her part, Stephanie answered, “A lot of emailing...”

“Actually I don’t think anybody in this room is as busy as Mr. Yang, so it was easier for Stephanie and I.

“And we have a very compassionate producer and she actually brought up the idea last October [2012].

“Since we have worked together before and it was a positive experience there’s really nothing to think about.”

Stephanie added, “For Raymond and I, this is our day job but for Mr. Yang it was like all fun.”

And Mr. Yang said, “Singing is fun, it’s a good way of relaxing.”

Raymond shared his observation about Mr. George Yang. “That’s what I like about Mr. Yang: he does this to relax. I do this to earn a living.

“This man is everything I want to be when I grow up: tenor and tycoon.”

This may be the first time that you'll be seeing Stephanie and Raymond on stage but this isn't their first time to work together.

Raymond has directed some of Stephanie's shows here in Manila. Their most collaboration was in July 2012 when Stephanie performed for A Little Big Bang concert at the Music Museum.

ON STAGE WITH STEPHANIE REESE. So how is it working with Stephanie?

Raymond answered, “I am very excited she’s a great talent. I have to be really careful because she’s very good.”

He adds, “Steph is a wonderful, wonderful talent and I was asked to direct her a year ago for the gala of the Union Bank of Switzerland, it was their 149th anniversary so I directed her with AMP Big Bang.

“And the next thing that happened was a producer wanted to make a show for her so last July, I directed A Little Big Bang for her at the Music Museum. That was Stephanie Reese and Jed Madela.

“Then the producer of that show liked it so much and she goes ‘Can you direct and appear with her?’

“Ako naman, sure why not!

“Stephanie is a great talent it’s my honor to sing with her.”

“This guy, he’s the one responsible for bringing McDonald’s here in the Philippines. He’s the two things I want to be when I grow up, tycoon and tenor,” says Raymond. “So it’s great to have George in the show.

REPERTOIRE. Raymond revealed that he is celebrating his 30th anniversary as a singer. He believes this concert will serve as a great venue for him to sing songs that made him popular during his career spanning three decades.

“Coincidentally, it means a lot to me because this is my 30th year so it has been 30 years since songs like “So It’s You,” “Farewell” and “I Need You Back,” he revealed.

“I just think it’s wonderful that there’s a concert for me this year.”

Apart from the hit songs of the balladeer, international performer Stephanie is also set to wow the crowd with her duet with tenor George.

Raymond reveals, “Mr. Yang is doing a beautiful duet with Stephanie which is 'Con te Patriro' if you are familiar with the Bocelli and Sarah Brightman version.

“Then the three of us come together to do a really let your hair down production number which I will not mention first.”

Enjoy timeless music during the Seasons of the Heart concert on February 12 at the Dusit Thani Manila Grand Ballroom.

Raymond and Stephanie will be accompanied by AMP Band under the musical direction of Mel Villena.

One round of drinks