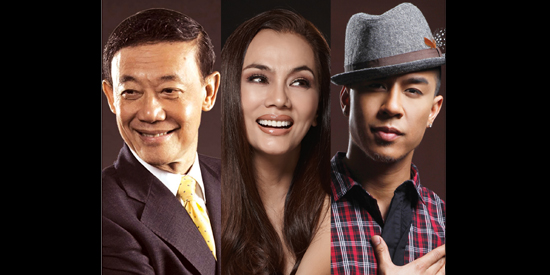 Have a new reason to fall in love and stay in love.

For Love Matters, Kuh and Jose Mari —who helped define the Golden Age of Original Pilipino Music in the 70s and 80s—will bring back some of the best love songs of decades past and present. The show’s lineup will consist of their timeless love songs, duets and lavish production numbers with a touch of R&B.

Kuh continues to break borders as an artist after more than three decades in the business. She continues to sing and perform and dominates every field she is into, and recently re-discovered her passion for the visual arts via a successful solo exhibit held last year. In 2013, Kuh is eyeing a return to the recording arena, and will be doing more concerts here and abroad while pursuing personal plans.

Diamond Record awardee Jose Mari is one of the most acclaimed singer-songwriters in the history of local music. His songs, including pop classics like "Afterglow," "Be Careful With My Heart," "Beautiful Girl," "Can We Just Stop (And Talk Awhile)" and many others—and the multi-platinum Christmas album Christmas In Our Hearts—have established him as a truly one-of-a-kind artist.

For his part, Kris Lawrence is acclaimed as one of the prime movers in the local R&B circuit.

He was the grand winner of ABS-CBN’s Star in a Million Season 2 in 2006, and is best remembered for his hit song, "Kung Malaya Lang Ako," as well as his unique renditions of "When I See You Smile" and "Careless Whisper." With two albums to his name, this prolific singer/songwriter is also seen regularly in the GMA-7 Sunday noontime variety show, Party Pilipinas.

Kris also garnered critical acclaim for his theatrical debut in 2011, when he starred with Nikki Gil in NineWorks Theatrical’s production of the Broadway musical, Sweet Charity.

For Kuh, working with Jose Mari has always been a blissful union of kindred musical spirits. “We’ve always had great rapport. His musical depth and genius have always earned my admiration and respect,” she says.

As for matters of the heart, Kuh weighs in on the hypothetical question: What matters more, love or romance? She quips, “Love matters most because when there is love, there is life. Romance is just one of the benefits of a good relationship, and love should not just be a feeling but a choice – because feelings can fade.”

Written and directed by Kuh Ledesma, with Rey Cristobal as musical director, ‘Love Matters’ is a production of ALV Events International.