K-pop idol group 2PM gears up for What Time Is It? concert; reveals plans to release a new album 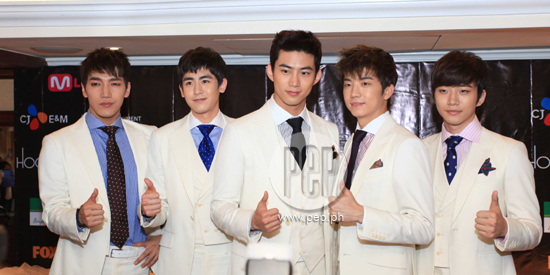 The Korean boy band 2PM is in the Philippines for a one-night only concert on March 2 at the SM Mall of Asia Arena. The group is composed of (L-R) Jun.K, Nichkhun, Ok Taecyon, Jang WooYoung, Lee Junho.

Korean idol group 2PM is currently in the Philippines for their first concert in the country. The 2013 What Time Is It? Live Tour to be held this Saturday, March 2, at the Mall of Asia Arena.

For most of the group, except Nichkhun, it’s their first time to visit the country. During the March 1 press conference held at the Manila Hotel, Jun Ho said that the Philippines is one of the countries that they wanted to visit and that they excited to show their fans what they prepared for the concert tomorrow.

Taecyeon, the main rapper of the group, expressed his gratitude for fans who welcomed them with banners and smiles during their arrival.

"When we got off the airplane, we're very grateful for the fans there. It will be great to see all of you tomorrow," Taecyeon said.

The other 2PM members, Nichkhun, WooYoung and Jun.K were also present at the press conference. However, their sixth member, Chansung, is still in Seoul filming the drama 7th Grade Civil Servant but Thai member and the newest Bench endorser Nickhun assured that he will be present at their concert this Saturday.

"Hottest" (or 2PM fans) should also look forward to the comeback of 2PM in the Korean music scene as Taecyeon revealed that they will be releasing a new K-pop album soon.

"We have an upcoming Korean album [and] it will be very great," Taecyeon said.

Taecyeon further teased the press about the theme of their album and even said: “be prepared for your mind to be blown.”

Aside from their comeback in the K-pop scene, Taecyeon also mentioned their upcoming plans this 2013.

"Maybe some [members will have] solo [albums] or acting,

"I can’t really say anything right now because it’s all confidential but expect great things from us,” promised Taecyeon.