Isabelle de Leon is in the LoveZone 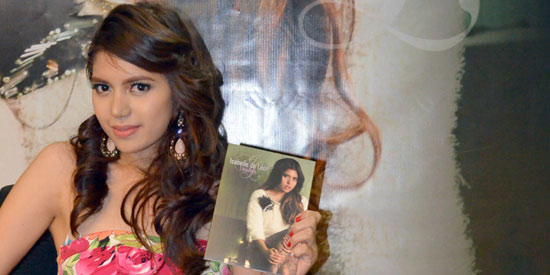 Now firmly shedding her childhood image (remember her as Duday in GMA-7's sitcom Daddy Didodu?), Isabelle looks the part of a confident young lady, ready to take on bigger things. She comes out strong with her debut album titled LoveZone under Polyeast Records.

All six tracks are original compositions by Isabelle, as both lyrics and music for each song were done by her. While it may surprise many that she can actually sing, Isabelle has loved music ever since she was a youngster. Dad Dean de Leon used to have a band in his college days. It was Isabelle's dad who cultivated her love for a variety of musical instruments including guitar, drums, bass, piano, and harmonica.

Isabelle says, "my dad is a musician, he plays the guitar and he taught me how to play all these instruments." Ranking the instruments though, Isabelle would have to place guitar as her strongest, with drums coming in a close second.

Isabelle was last seen on ABS-CBN's teleserye Nasaan Ka, Eliza? in 2011. She developed a deeper knack for songwriting when she was 16 years old. She shares, "I wrote all these songs, 25 original compositions, both the lyrics and the music when I was sixteen years old," but it took several years still before her album came out.

"Natagalan ako magrelease kasi the past few years as an actress talaga, child actress ako, so ngayon lang magkaroon ng chance din mag-bloom as a musician," she explains. She also finished high school and is now in her second year at Trinity University of Asia, taking up Mass Communication major in Journalism.

Isabelle, FAMAS Best Child Actress for her 2003 role as Helen in Magnifico, doesn't let past success get to her or stop her from reaching for more. She says that working on LoveZone, "napakaraming kong natutunan talaga, lalo para sa first album ko, nasa sa Polyeast, respetado sa music industry..."

Having sampled and tasted both sides of the table, Isabelle says that music is something, "I enjoy every bit of it sobra, mula sa songwriting, sa performing, sobrang masaya."

Isabelle joined Polyeast Records when they asked her to sample some songs, and Isabelle made the wise decision to perform acoustic on her guitar for them. Recalls A&R Director and producer Chito Ilagan, "nung kumanta ng isang song, sabi niya I have 25 more and we were just so impressed."

The first six songs were already a stand-out, says Chito, and that it was a group decision to get Isabelle and eventually come out with six of the songs she wrote.

Chito explains why LoveZone only has six tracks. "She has a lot of good material, so we had to tone down kasi ang dami. And decided eto na muna. Otherwise we could have done two albums. It was because we wanted to show how good she is, with the hard climate right now, gusto namin todo kaagad, di yung pakonti konti na yung iba lang ang matugtog." Chito says that because of the trimmed down choice, all the songs are receiving very good airtime and exposure.

As a debut album, LoveZone shows much promise and sets a good foundation for Isabelle as a strong songwriter and thanks to her very mature, rich voice, is very easy on the ears. Songs include "Feelingero," carrier single "1 Week To Move On," "Alice Wonders," "Pag-Ibig Ko'y Sa 'Yo," "Sa Yakap Mo," and "Friend Zone."

LoveZone is out in record stores under Polyeast Records and will be officially launched on ASAP 18 sometime in April.