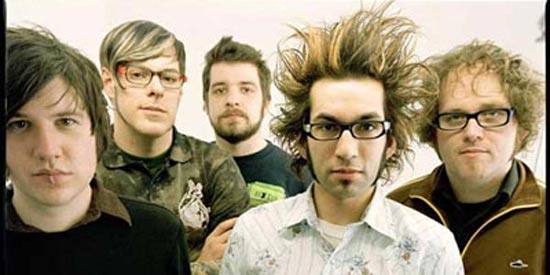 "I think one thing we try to do is not worry about what anyone's going to think and just make music that has that special thing for you because that does it. And even if people don't like it, screw it," says Joshua Cain, lead guitar and backing vocals of Motion City Soundtrack on one of the band's many web outlets. Motion City Soundtrack has stuck to that kind of thinking, producing five studio albums in 14 years and a steady stream of followers.

Last March 9, they performed at the Skydome in SM North, their last Asian city stop before heading back to Illinois for their next concert. Joshua Cain is joined by his Motion City Soundtrack bandmates Justin Pierre (lead vocals and guitar), Jesse Johnson (keyboardist), Matthew Taylor (bassist), and Tony Thaxton (drummer).

"That sounds right," remarks Joshua when reminded of what he said several months ago.


They have no problem having a niche market so to speak because "the keyword there is TRY not to worry about what people think because we do worry sometimes even if that is the thing you tell yourself not to do. I can't make people like us or change who I am or what we are doing," explains Joshua.


Justin pipes in, "I feel like we definitely do not appeal to a large mainstream type of people, for better or for worse...the weirdos and freaks and what not, I love them with all my heart. But I guess to try to be anything other than yourself," that is something that simply wouldn't sit right with him.

Motion City Soundtrack came together 14 years ago in their hometown of Minneapolis, Minnesota and unlike other musicians who are naturally skilled in playing an instrument, Joshua says, "when I decided that I wanted to be in a band and make music, I couldn't play an instrument, when I started I was terrible but then I started getting good at it. I didn't know how you became a rockstar, how to be cool..."


Justin agrees by saying, "Music just seems to make sense to us when other things didn't." They went to school, had other jobs, but music and their love for it seemed to keep bringing them together. Justin continues that "we'd rather be poor and make music than not have that. But luckily for us, we are able to make a career out of it. We would be doing this no matter what."

Their unusual pop-punk sound strikes the balance between upbeat music and darker lyricism, and they are not afraid to tackle life's big questions and face raw emotions head on. This has endeared them to fans worldwide. They also placed heavy emphasis on touring and playing in all sorts of places.


Jesse points out: "Nowadays with Internet, having the information and stuff online," the barriers to people hearing about your music has lessened even more.


"We toured a lot and ended up bigger in cities other than our hometown."


Justin adds, "Touring played a really big part in making our career, but another huge thing really is the Internet. The fact that people could get our music for free and listen to it, I wouldn't underestimate having people listen to music for free..."

Joshua further explains their way of thinking when it comes to writing their songs, "each of us will come with whatever song we are working on: an idea on guitar, an idea on bass, drums or keyboards, or sometimes Justin's stuff for the melody usually, so we go with what feels right."


What do they draw inspiration for their songs?


"Everything I do," admits Justin. "A lot of the time there is a good check and balance system, we've had some pretty awful lyrics in the past, and now as I'm getting older, I'm getting to branch out into other territories." They make music together and ensure that ideas get bounced off each other, with everyone getting their voice heard, literally.

This mutual give and take has allowed Motion City Soundtrack to flourish for 14 years and stay united for that long, not an easy feat in the sometimes fickle nature of the music industry. Matthew reveals that being in a band is "much like being in a family, you just have to respect one another and understand people's personalities...when someone needs space, you give them space."


Justin quickly quips, "It also helps that we live in four different states!"


According to Joshua, they also manage to keep their music fresh "by not worrying about the outcome as little as we can, and writing what makes us feel good at that moment." He adds that they oftentimes go down paths they haven't tried instead of sticking to what worked for them in the past.

Motion City Soundtrack is excited to be performing in front of a Filipino audience, fresh from their Tokyo and Indonesia stops. Jesse reveals, "we all agree that coming to Asia and Southeast Asia, we really enjoy that a lot...the people we met and we appreciate the opportunity to travel to Manila."


Justin says, "The fact that we are actually here, right now, and get to do this is amazing. Already I'm 90% there. If there are people there at the show, and those people are happy, that's gonna be awesome."

Their hit releases "Commit This To Memory," "Even If It Kills Me," My Dinosaur Life," "Hold Me Down," "Broken Heart," "True Romance," and "Disappear" among others are sure to remind long-time fans why they love Motion City Soundtrack. During the concert, the band will also be performing songs from their latest album, Go, which they promise is their most mature and developed album to date. Justin says, "I feel like this album is a choose-your-own-adventure book in the sense that you can look at these songs from different angles depending on your mental state."