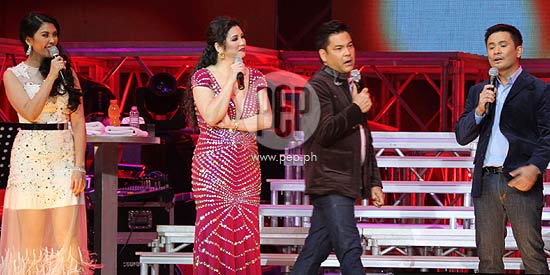 (From left) Pops Fernandez, Regine Velasquez, Martin Nievera and Ogie Alcasid injected new material along with their old spiels in Foursome: The Repeat.

It didn't matter that Manileños had three choices in the same area last Saturday, March 16, 2013: the 4th Philippine International PyroMusical Competition (featuring China and Australia), Solaire Resort & Casino opening, and Foursome: The Repeat concert. That day, all roads seemingly led to Mall of Asia as traffic was at an all-time high, even factoring in that it was a payday weekend.


The SM Arena was once again sold out for Foursome: The Repeat with some concertgoers repeating the experience, much like this writer. Some celebrities spotted in the audience that evening included Ai-Ai delas Alas with her boyfriend Jed Salang, Eddie Gutierrez and Annabelle Rama, Michael V, BB Gandanghari, Jay-R with a mystery date, Christian Bautista, and Mark Bautista.


The fierce foursome did it again and Mr. Pure Energy Gary Valenciano joined them in providing an electrifying night of entertainment. Though the concert started later than stated, the crowd's excitement did not diminish.


Regine Velasquez-Alcasid and Pops Fernandez continued to display the same easy-going banter that transpires between two friends who are comfortable enough with each other to the point of being kenkoy. While some of their spiels were indeed repeated (the mayaman clap and cheer like this versus the mahirap sigaw and wild gestures do it like this bit, how Pops gave birth to her two big boys simply by coughing them out so to speak) as this is a "repeat" concert, they managed to inject some new material alongside the old.


The two singers also teased each other as "kuripot" and "gastadora" when it comes to shopping together. The crowd roared in laughter at the crazy antics and conversation of the two ladies.


Their whole repartee provided a very nice breather for them and for the audience, especially since Foursome: The Repeat was chock-full of songs. The two also showed off their mutual admiration for the other, with Regine asking the Concert Queen fans to shout when Regine would say so and Pops asking the Songbird's fans to do the same when Pops would instruct them.


"Why don't we take them back to the '80s...eto yung favorite songs namin when we were still babies," Pops claims as she introduced their set of duets featuring the songs of Cyndi Lauper.


One new segment in Foursome: The Repeat was the appearance of Nate, the beloved son of Regine and husband Ogie Alcasid whom they affectionately call Booboo Bear. During this segment, Regine even sang to him during her '80s medley with Pops.


Pops also cracks a joke about Gary Valenciano as she and Regine are on stage to welcome him: "Di ako masyado familiar sa mga songs niya kasi I wasn't born yet." Regine retorts by saying, "Ano, you wasn't born yet?"


Gary Valenciano was included in Foursome: The Repeat as a special guest star. Ang Hari ng '80s, as Pops called him, performed an impressive collection of songs including "Di Bale Na Lang," "Sana Maulit Muli," "Eto Na Naman," and "Could We."


The audience in SM Arena shouted their lungs out to welcome him, and it's obvious that the singer's charisma and appeal have not faded one bit. The two guys, Martin Nievera and Ogie Alcasid, did their best to copy Gary V.'s signature footwork, even working in some choreography during "Di Bale Na Lang" but they ended up just looking funny and entertaining.


Gary V. chatted with the four singers on stage, saying that it felt good to be with all four on the same stage, a feat that is rare these days given that the five singers belong to competing networks and rival Sunday noontime shows.


Martin remarks, "I used to watch Gary when I was a little boy!"


Pops tries to explain, "You know when we were five years old, we had to work na. The very first time I saw Gary was at PETA..."


Martin points out, "All I know is, Ogie is the President of OPM [Organisasyon ng Pilipinong Mang-Aawit] and Gary is the Vice-President."


This prompted Pops to ask Martin, "And you are?" Martin quickly says, "I am the maid," with all seriousness, "I'm nowhere near in their neighborhood."


Ogie praises him, "Then you are a maid with a wonderful voice, Mr. Martin Nievera!"


Gary tells the four singers, "You know I feel like a fan being up here on stage."


Martin assures him, "We are a fan of you...and you know who should also be here? Zsa Zsa!"


Everyone echoes the same thought and the camera zooms in to where Zsa Zsa Padilla is sitting. Zsa Zsa goes on stage wearing a wonderfully tight, form-fitting pink knee-length dress, looking gorgeous as ever.


Gary says as soon as Zsa Zsa is on stage, "This is the exact way it was noon..."


Regine gushes over Zsa Zsa, "Ang ganda-ganda ni Zsa Zsa, ang payat-payat, di ba?" to which Martin agrees, "She's as beautiful and as strong as ever."


The six immediately pause for a photo, asking photographers to tag them by offering their Instagram accounts, then doing it all over again for a wacky shot. The crowd is loving this entire portion and laughing along with the foursome plus two on stage.


Martin asks Zsa Zsa, "Can you be in our next concert?" Zsa Zsa answers "Siyempre," and Gary interjects, "Excuse me, you haven't [asked me]..." Martin says that Gary is automatically included given his participation in that night's concert.


Regine thinks out loud what the concert will be called when the six of them perform next year. At this point, Martin shouts, "Sixsome!"


Ogie pipes up and says that he would like to recommend something, "Maybe if it's the six of us, it can be Fivesome and The Handsome!" The crowd doubles up in laughter over the Songwriter's suggestion.


Martin, quick as a whistle, answers back, "I think it should be called Five and a Half!" and at this point the crowd bursts into laughter again.


Based on the murmur of the crowd that night, it seems very likely that a Sixsome concert could be held in the future.


Even though they performed many of the same songs as the first installment of Foursome, concertgoers could see the effort that Regine, Ogie, Pops and Martin put in to make each segment fresh. It was also noticeable that they updated some of the song arrangements. For example, part of Ogie's solo set included "Kung Mawawala Ka," where he went down and sang with the crowd, going up to the Lower Box areas. Ogie also did an impressive turn in singing Gary's "Di Bale Na Lang" and "Eto Na Naman," delivering an energized, upbeat and jazzy take on these favorites.


The foursome also sang Rihanna's "We Found Love," showing that even if they have been performing since the '80s, they know how to keep up with modern songs and capture a younger audience at that.


During Martin and Pop's duets, the Concert King & Queen stayed true to the delivery of their songs, the point of which was to celebrate their love story. However, during their duet set, the video flashing on the stage wall was updated to include more photos of the former couple and their family's growing up years. It was refreshing and nostalgic to be reminded of what these two were and what might have been had they stayed together.


This time, Martin did not have his son Robin sing "Be My Lady" during his solo set. Instead, he reworked some of the lyrics to sing it to Mrs. Angeli Valenciano, BB Gandanghari and Michael V, the latter singing a couple of lines.


Also, during this set of songs, Martin hammed it up with the camera and shoved his face into it, pretending to pop a pimple, making funny faces, even handing the microphone to the cameraman so he could sing. This elicited a huge crowd reaction, as everyone got treated to the let-loose side of Martin, a side usually seen on his new talk show on ABS-CBN: Martin Late @ Night.


During his performance of "Say That You Love Me," Martin zeroed in on the person who will complete the possible Sixsome herself: the Divine Diva Zsa Zsa Padilla. As she sang, the crowd cheered and the possibility of there ever being a Sixsome seemed even more likely.


Martin's message was clear as he admits, "counting 30 years in the industry, and counting, make every moment count because I sing for you, yesterday, today and forever."